The new clip for "Feels Like Summer" is loaded with recent hip-hop references. 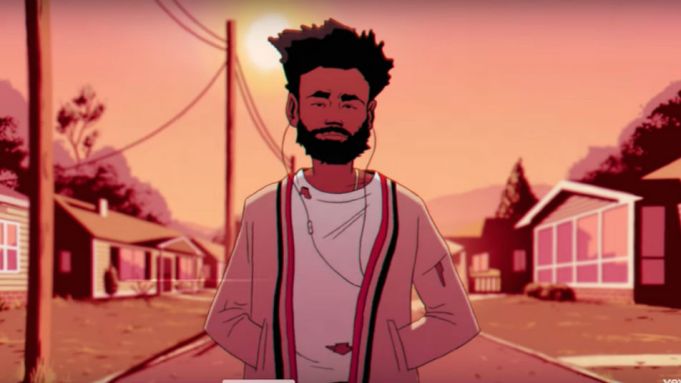 Over Labor Day Weekend — the unofficial end of the summer — Childish Gambino dropped an animated video for his song “Feels Like Summer,” one of two seasonally-themed songs he released back in July. While not as densely packed with signifiers as his powerful and politically loaded “This Is America” clip, the new one is filled with recent hip-hop references, including Nicki Minaj and Travis Scott — who were recently embroiled in a controversy over Billboard No. 1 calculations — playing with blocks, A$AP Rocky and Solange playing tug of war with The Weeknd, Future stealing Drake’s bicycle, and most notably, Kanye West crying in a “Make America Great Again” hat while Michelle Obama hugs him. All of this and much more — look out for Beyoncé, Jay-Z, Chance the Rapper, 21 Savage, Oprah, Will Smith, Lil Uzi Vert and even late artists like XXXTentacion, Michael Jackson and Whitney Houston — takes place while a cartoon Gambino strolls through a traditional summertime scenes.

The clip was co-directed by Gambino— a.k.a. singer/actor/rapper Donald Glover — Ivan Dixon and Greg Sharp, and illustrated by Justin Richburg.

Glover, who launches a five-week nationwide tour with Vince Staples and Rae Sremmurd on Thursday, has dropped four new songs since announcing his new deal with RCA Records back in January: He released another summer-themed song called “Summertime Magic” at the same time as “Feels Like Summer,” and on “Saturday Night Live” in May, he debuted a new song called “Saturday” along with “This Is America.”

“Summertime Magic” was billed as “the first official single from Gambino’s forthcoming debut album.” While no release date has been announced, it seems likely that the album, which will be released through RCA on the Wolf + Rothstein label, could drop at any time in the coming weeks.

Glover has said that he plans to retire the Childish Gambino name after this album.