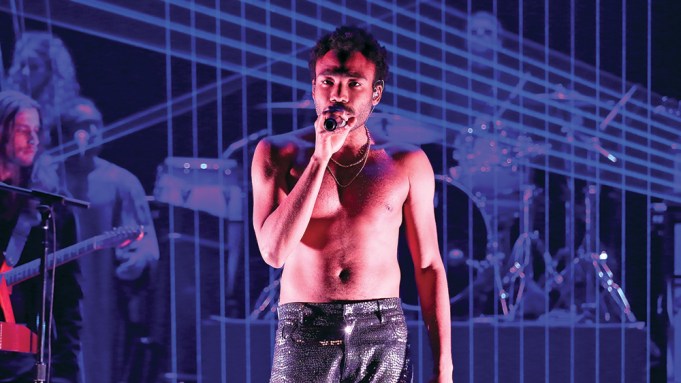 UPDATED: In the middle of his appearance as host and musical guest on “Saturday Night Live,” Donald Glover (aka Childish Gambino) dropped a video for a new song that veers between comedy, commentary and surrealism called “This Is America.” Filmed in a large warehouse, the deeply nuanced video — Complex has done a pretty thorough analysis — features a shirtless Glover dancing between scenes that alternate between humorous (his facial expressions) and disturbing (he pulls out an assault rifle and shoots both a hooded captive and, apparently, a gospel choir). In the video’s closing moments, SZA (or someone who looks an awful lot like her) makes an appearance, sitting on a car and looking briefly at the camera.

The song’s lyrics have a similar duality, shifting quickly from lighthearted (“I know you wanna party/ Party just for me/ Girl, you got me dancin’/ Dancin’ free”) to heavy (“This is America/ Police be trippin’ now/ Yeah, this is America/ Guns in my area”).

Shortly after the video dropped, he performed the song as his second musical spot on “SNL,” again shirtless but this time accompanied by an elaborate laser-ish lighting and several dancers wearing school uniforms; the song’s political implications were less obvious in that performance.

“This Is America” marks the first new music Gambino has dropped since the release of his Grammy-nominated album “Awaken, My Love!” late in 2016.

Glover recently left Glassnote Records for RCA and is expected to release a new album later this year. He will head out on tour in the fall with special guests Rae Sremmurd and Vince Staples; he is also performing at a new installment of his elaborate Pharos festival in New Zealand in November. Glover has said that the next Childish Gambino album he releases will be his last, explaining, “I think endings are good because they force things to get better.”

Glover fully embraced the opportunities of his double-bill “SNL” appearance, performing two songs as well as appearing in nearly every skit on the show, including one in which three members of a group styled on Migos are sitting in a therapy session.