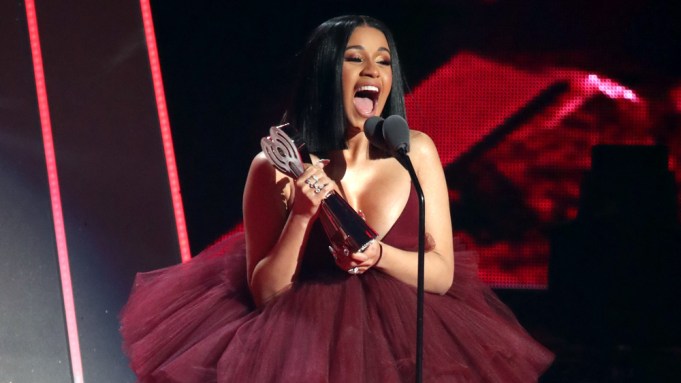 Fresh off a win for best female rap artist at Sunday’s Billboard Music Awards, Cardi B has released a music video for her new song “Be Careful,” showing a romance gone wrong.

In the video, which went live Monday morning, the rapper walks down the aisle and gets married in a church in the middle of the desert, warning her beloved to “be careful with me.” Shortly after, the marriage takes a dark turn as Cardi B returns to the church, this time for her husband’s funeral, slamming the coffin shut as she sings “you make me sick.” She then takes off in a convertible through the desert, pulling over to stick a cross into the dirt, which is just one of the many religious symbols featured in the video.

“Be Careful” is one of four singles from Cardi B’s debut album “Invasion of Privacy,” which dropped April 6, along with “Drip,” “Bartier Cardi” and her breakout single, “Bodak Yellow.” She also recently teamed up with Jennifer Lopez and DJ Khaled for “Dinero,” and appeared on single “Girls” with Rita Ora, Charli XCX and Bebe Rexha.

After taking the stage at Coachella, the MC cancelled all of her summer concert dates due to her pregnancy. But she promised “I’ll be back for the Bruno Mars tour,” which begins in Denver on Sept. 7, around two months after the due date of her child with fiancé Offset of Migos.