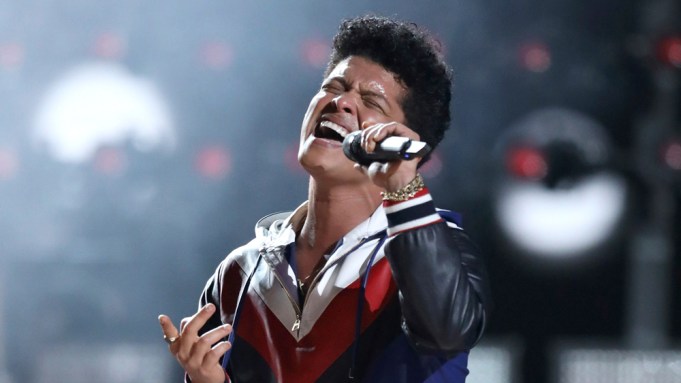 This year’s Emmy race in the music categories takes on greater interest because a win in the song category could instantly give songwriters Benj Pasek and Justin Paul an EGOT, having already won Oscar, Tony and Grammy awards.

Pasek and Paul — whose “La La Land,” “Greatest Showman” and “Dear Evan Hansen” songs have catapulted them into the front ranks of American songwriters in the past two years — are nominated for their new song, “In the Market for a Miracle,” written for Fox’s “A Christmas Story Live,” an adaptation of their 2012 stage musical.

They are just two of 28 first-time nominees in the six music categories, announced Thursday morning by the Television Academy for 2017-18 programs. Nearly 60 percent of all the music nominees are newcomers to the Emmy race. Ironically, several musicians were nominated for non-music categories: Donald Glover (“Atlanta”), John Legend and Sara Bareilles (“Jesus Christ Superstar”, and Darren Criss (“The Assassination of Gianni Versace: American Crime Story”) all received acting nods — and Legend is in the running for an EGOT as well. (Head here for a complete list of nominations.)

Pasek and Paul face off against past Oscar winners Dave Grusin and Marilyn and Alan Bergman, who are nominated for their song “Just Getting Started” from the HBO show “If You’re Not in the Obit, Eat Breakfast”; Steve Martin, for “The Buddy Song” from his Netflix special with Martin Short, “An Evening You Will Forget for the Rest of Your Life”; and “Saturday Night Live” music director Eli Brueggemann for “Come Back Barack” done by Chance the Rapper.

First-time nominees in that category include Mark Rivers for “Totally Gay” Netflix’s animated “Big Mouth” and Jonathan Coulton for “High Crimes and Misdemeanors” on the CBS All Access series “The Good Fight.”

The most surprises are in the original-score categories: Five of seven nominees in Music for a Limited Series, Movie or Special are newcomers, including a pair from the feature-film world: Harry Gregson-Williams (“The Martian”) was nominated for Amazon’s “Philip K. Dick’s Electric Dreams” and Daniel Pemberton (“Steve Jobs”) was cited for the “Black Mirror” episode “USS Callister.”

Also nominated for the “Electric Dreams” series was Cristobal Tapia De Veer. Cyril Aufort received a nomination for Hulu’s “March of the Penguins 2: The Next Step,” while Carlos Rafael Rivera was nominated for an episode of Netflix’s western “Godless” and veterans Mychael Danna (a past Emmy winner) and Jeff Danna (three-time nominee) were cited for their music for Netflix’s “Alias Grace.

Music Composition for a Series was dominated by previous nominees and winners. They included Ramin Djawadi, nominated for both “Game of Thrones” and “Westworld” episodes; three-time Emmy winner Sean Callery, for “Marvel’s Jessica Jones” on Netflix; past Emmy winner Mark Isham, along with newcomers Cindy O’Connor and Michael Simon, for the series finale of “Once Upon a Time”; and previous Emmy winner W.G. Snuffy Walden, along with collaborator A. Patrick Rose, for CBS’s “Seal Team.” Kevin Kiner is the sole newcomer in this category, for an episode of the animated “Star Wars Rebels.”

Overlooked for nominations were such notables as Trent Reznor and Atticus Ross, who scored the PBS documentary “The Vietnam War”; leading classical composer Nico Muhly for his “Howards End” score; and the composers from such talked-about, big-orchestra sci-fi shows as “The Orville,” “Star Trek Discovery” and “Lost in Space.”

This is only the second year for the category of Music Supervision, which focuses on the use of songs in shows, so most of those nominees are also marking their first time at the Emmys. Nora Felder was nominated for the second consecutive year for her music supervision of “Stranger Things.”

Also nominated were Jen Malone and Fam Udeorji for “Atlanta,” Jennifer Pyken for “This Is Us,” Sean O’Meara for “Westworld” and the trio of Robin Urdang, Amy Sherman-Palladino (also nominated for directing) and Daniel Palladino for “The Marvelous Mrs. Maisel.”