Portugal. The Man, Questlove and Hugh Jackman were also on hand at Asbury Lanes on Monday night. 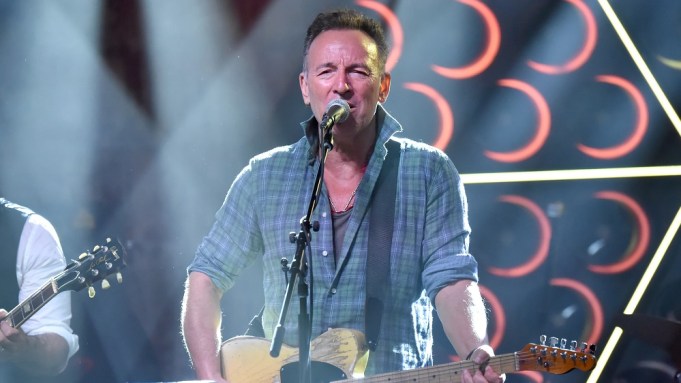 Courtesy of Kevin Mazur for iStar

“We didn’t know if we would ever see Asbury come back or not, in our lifetime, so it’s been a joy watching what’s been happening in town over the past 10, 15 or 20 years,” he told a crowd of less than 800 people. “I walk down the boardwalk now, I feel like the Ghost of Christmas Past,” he said, praising the art and LGBTQ communities for the rebirth of the seaside community that nurtured his own artistic growth. “But that’s okay. It’s fun to watch Asbury’s future unfold in front of me.”

Springsteen stepped out of the spotlight long enough to allow Clinch’s outfit-fronted by singer King B. King —to entertain the crowd with blues renditions of songs by The Beastie Boys (“Fight for Your Right to Party”), The Talking Heads (“Life During Wartime”), and The Velvet Underground (“Waiting for the Man”). Clinch, who photographed Springsteen for the cover of Variety last year and directed Pearl Jam’s film, “Let’s Play Two”, shined on harmonica as well as a vocal turn on the Tommy Tucker blues classic, “High Heel Sneakers.” Springsteen then jumped in for a fun, sweaty set of bar-band rock, jamming out the leads on “Rockin’ Pneumonia and the Boogie Woogie Flu” by Johnny Rivers and the often covered Muddy Waters slow-burner,  “I Just Want to Make Love To You.”

“We’re gonna send this one out to all the folks from the old Asbury Lanes who kept this such a funky place,” he said before “Down the Road Apiece,” a blues standard recorded by Chuck Berry and The Rolling Stones.

Watching Springsteen instruct the band in his own “School of Rock” way while performing (“I’m going to count you in, and then back to the verse!”) was particularly entertaining during “Road” and show closer “Twist and Shout.” It was also fun to observe Clinch ditch the harmonica — if only for a minute — to grab a camera and start shooting Springsteen on equal plane only feet away.

While that set was a tough act for Portgual. The Man to follow, the Grammy Award winning band fired up Asbury in its own way, setting off the fire alarm not once, but twice, during the funky song, “Purple, Yellow, Red and Blue.” Perhaps the club’s logistics wasn’t ready for the group’s laser light and smoke machine spectacular, but the band — including John Gourley, bassist Zach Carothers and the impressive guitar work of Eric Howk, who was injured in an accident that left him parapalegic — ignited the Lanes with a generous set that included incredibly cool covers interspersed throughout. Among them: Metallica’s “For Whom the Bell Tolls,” which segued nicely into Pink Floyd’s “Another Brick in the Wall,” and “Atomic Man,” which neatly gelled with The Rolling Stones crowd-pleaser, “Gimme Shelter.” Of course, the band brought it all down with the smash hit “Feel it Still.”

The celebration began at sunset with a cocktail hour for invited guests. While the menu included hors d’oeuvres of spring rolls and glasses of champagne to toast the event at the adjacent Asbury Hotel, the very Jersey options of wings and disco fries mixed well with the balmy night and sea air.

An unfortunate lightning storm moved the rooftop after-party to the downstairs lounge area at the hotel, but DJ Questlove was unfazed by the change in plans, spinning a brilliant set that mixed The Crystals, Big Joe Turner (“Shake Rattle and Roll”), The Violent Femmes, The Eagles and — in a nod to Springsteen — “Rocking’ Pneumonia and the Boogie Woogie Flu.”

Guests in attendance were selected via a lottery of local residents and a smaller one for non-residents. The Asbury Lanes opened in partnership with master developer iStar and is booked by Bowery Presents. As part of the celebration and in the spirit of community, local developer iStar donated $125,000 in support of Boys & Girls Clubs of Monmouth County.