Beyonce and Jay-Z Drop Joint Album ‘Everything Is Love’

A new video was also released featuring the couple at Paris' iconic The Louvre. 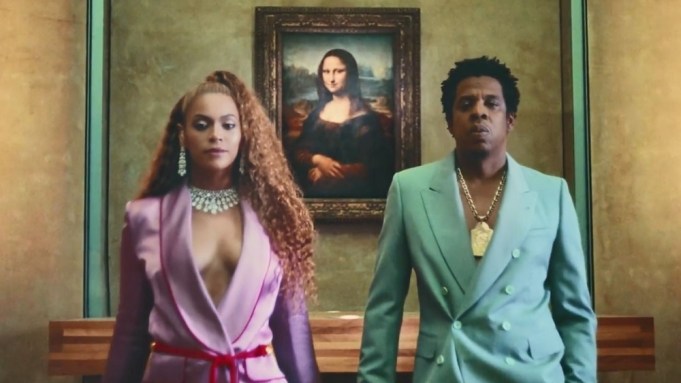 It had been rumored for years and it has finally arrived: a joint Beyonce-Jay-Z album. Called “Everything Is Love,” the announcement was made by Tidal, the streaming company owned by Jay-Z. It features nine tracks, each credited to Beyonce and Jay-Z — or The Carters — and clocks in at just under 40 minutes, unusually brief for both artists; there is also a bonus track available on Tidal called “Salud” that the duo presumably felt didn’t fit with the album’s sequence. According to unofficial credits, the album features production from Pharrell Williams (two tracks, “Nice” and “Apes—“), Cool & Dre, Boi-1Da, Vory, Jahaan Sweet and Sevn Thomas, and guest spots from Migos (“Apes—“) and Pharrell.

The news began trickling out on Saturday afternoon with social media posts containing images from the “Everything Is Love” visual campaign. One image posted by Beyonce on Instagram received nearly 200,000 likes in less than 20 minutes as many noted that, once again, Queen Bey had broken the internet.

It was later revealed that a video was made for the song “APES—“ and was filmed at the Louvre in Paris last month. Directed by Ricky Saiz, the video features the pair posing in various settings in an oddly empty Louvre, delivering their lines in front of centuries-old masterpieces, even the Mona Lisa. The clip also features dancers performing synchronized moves on the museums steps, and Beyonce and several dancers gyrating in front of famous paintings, and Jay-Z takes shots at the Grammys and the Super Bowl during his verses in the middle of the song.

Elsewhere, Beyonce throws shade at Spotify. Not only is she a shareholder in Tidal (as well as being married to its owner), she passed up millions of dollars by giving the company exclusive streaming rights to her 2016 album “Lemonade.” She references this in the lyrics to “Nice”: “Patiently waiting for my demise/  Cause my success can’t be quantified/  If I gave two f—s about streaming numbers/  Would have put ‘Lemonade’ up on Spotify/  F— you, f— you.”

Beyonce also interpolates Notorious B.I.G.’s 1994 classic “Juicy,” and Jay references recent events like Meek Mill’s release from prison and even shooting the video for “Apesh–” in the Louvre.

The album seems to function as the last installment in a sort of marriage trilogy that began with Beyonce’s 2016 album “Lemonade” and her widely discussed stories of infidelity, continued with Jay’s tales of contrition on his “4:44” last summer, and apparently reaches a happy ending with “Everything Is Love.” Not only does everything about the album — its visuals, its lyrics, its shared musical spotlight, even their daughter Blue shouting out her younger twin siblings, Rumi and Sir  — telegraph a happy, equal marriage that’s weathered its storms but come out stronger, the lyrics to the closing song “Lovehappy,” with its throwback ‘70s soul chorus, familiar sample and tag-team vocals, could be a wedding song for a new generation. “Sometimes I thought we’d never see the light/ Went through hell with heaven on our side,” Beyonce sings at the song’s end.” Damn, look at us now/ Pray, pray for the vows/ Way up now, yes, and a way, long way down/ We came, and we saw, and we conquered it all/ We came, and we conquered, now we’re happy in love.”

Beyonce and Jay-Z are currently performing on the 48-date On the Run 2 tour. They have been averaging a per-show gross of $5.5 million, according to Pollstar, on an average per night haul from 48,642 tickets sold. The trek next hits Amsterdam on June 19.