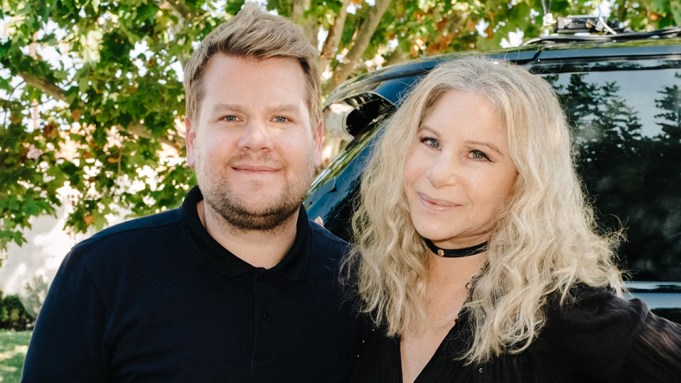 Don’t bring around a cloud to rain on James Corden’s parade.

After racking up numerous unpaid parking tickets, the “Late Late Show” host gets an unfortunate wheel clamp on his Range Rover in the latest “Carpool Karaoke” preview.

Stranded in Los Angeles and in a hurry to get to work at CBS Television City, he calls superstar Barbra Streisand for help.

“Hey mate, I’m in a real bind here. Is there any way you can help me? Ah, you’re a lifesaver,” says a relieved Corden.

The multi-award winning singer comes to the rescue and in a rare twist, Corden is the one in the passenger seat.

When he asks to turn on the radio, Babs is hesitant: “I don’t usually put the radio on and hear music. Do you really have to hear music?”

The duo begin singing “Don’t Rain on My Parade,” the famous number from 1964 musical “Funny Girl.” The song was also featured in the 1968 movie version and both versions feature Streisand performing the hit.

“Don’t tell me not to live, just sit and putter. Life’s candy and the sun’s a ball of butter,” belt the talented pair.

The full segment will air Thursday Nov. 1 on “The Late Late Show with James Corden,” which airs weeknights on CBS at 12:35 a.m.