The Swedish DJ, who died on April 20, received a loving tribute from Kygo. 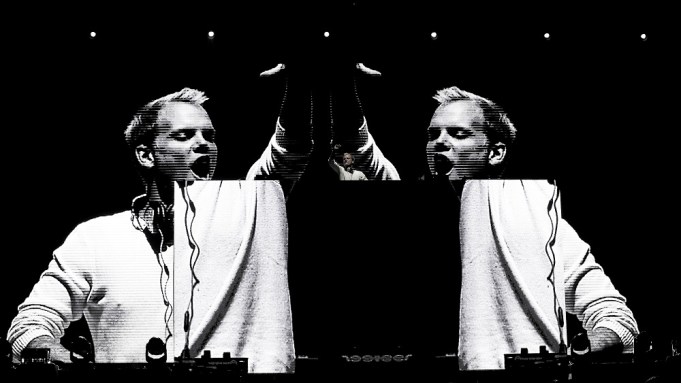 The unexpected death of EDM superstar Avicii on the first day of the second weekend of the 2018 Coachella festival brought a somber tone to the desert fest, especially near the Sahara Tent — the EDM stage where (in a different location on the field) the DJ closed out the night in 2012.

Avicii received a loving tribute from the stage thanks to Norwegian DJ Kygo. Towards the end of his set, an image of Avicii appeared in triplicate on the giant video screens while the 2017 song “Without You” played. The screens then flashed to Avicii’s name and the words: “Rest in peace. We will miss you.”

On Saturday night, Nile Rodgers, who had collaborated with Avicii, said from the stage: “Just yesterday, one of my best friends in the world, Avicii, passed away.” Rodgers, who survived cancer after being diagnosed eight years ago,  remarked that he was lucky to be alive, and with his band Chic played the “Daft Punk” hit “Get Lucky” (on which Rodgers also appears) in tribute.

Fans, too, felt the loss. “A bunch of people texted me and were like,’Did you hear about Avicii?'” said Brooke Brush, 23, outside the Sahara tent on Friday. “It’s crazy because, honestly, he’s the reason I got into electronic music. All his music totally turned me on to EDM.”

The Boston native was confident that the DJ would get his dues on the field this weekend. “I hope a lot of people do tributes this weekend,” she said.

Josh Rittenhouse, an agent at APA, likened Avicii to Kurt Cobain.”What [Cobain] was to grunge music, Avicii was for dance music,” he said. “It’s always sad to see someone die at such a young age. I think it’s going to inspire people — like how Cobain inspired so much — and more growth in dance music. That guy left such a mark, and it’s going to keep evolving. He’s a pioneer.”

Added Ferry Rais-Shajhaghi, head of electronic music at APA: “He pioneered a sound and was able to open up so many doors, not just for artists, but managers, agents, influencers, curators… It’s such a horrific and tragic thing to happen. … I hope people are able to manage their clients better, make sure they maintain a healthier lifestyle. Because at the end of the day, as much as it sounds like a rock ‘n’ roll life, you’re a human being. You have to take care of your body, your mind and your health.”

Alexandra Greenberg, an executive at MSO Public Relations, represents several electronic musicians, and though Avicii was never a client, they ran in the same circles; Greenberg was a publicist for Ultra, where the Swedish DJ performed many times. “It’s a really sad day, because he’s the first icon of EDM to pass away,” she said. “There are so many people around the world who cherish his music deeply, and its so sad we will not get more of him.”

Jeremy Hulsh, of Oleh Records, was backstage when he heard the news, and was visibly shocked. “It’s obvious his passing is going to have ripple effects,” he said. “I place him in the same realm as when Kurt Cobain passed away [for my generation.] There are a lot of kids probably hurting right now.”

Avicii’s death hit the music industry hard, particularly those who worked with the DJ, like Geffen Records president Neil Jacobson, who spoke to Variety hours after the news broke.