At NSYNC Walk of Fame Ceremony, Lance Bass Opens Up About Fears of Coming Out 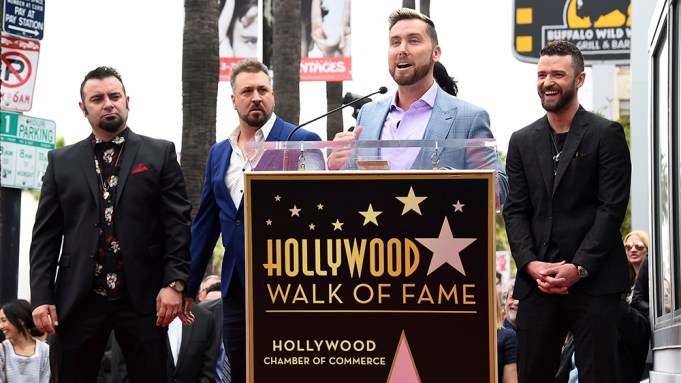 Minutes away from the grand entrance of NSYNC members Justin Timberlake, JC Chasez, Lance Bass, Joey Fatone and Chris Kirkpatrick, as thousands of fans packed the Hollywood Walk of Fame for the group’s star dedication, there was nearly a major fumble. No one took a spill physically, but tears were almost shed as Britney Spears’ “Oops!… I Did It Again” came over the P.A. “Why you gotta play Justin like that?” yelled one fan to no one in particular. The DJ quickly switched gears in response. These, all in attendance would learn, were some incredibly devoted followers.

That sense of community inspired the members of the beloved boy band to make a series of emotional speeches, not the least of which came from Bass. Explaining how he felt an obligation to keep his sexuality secret during the group’s height, he revealed: “I thought if I had come out, *NSYNC would be over. So I kept my secret.”

*NSYNC would grow to become one of the biggest bands at the turn of the millennium, breaking sales records with their 2000 release “No Strings Attached” and subsequent arena and stadium tours. Said Bass: “So many nights onstage, I’d see young, gay fans singing their hearts out and I wanted so badly to let you know, I was you. I just didn’t have the strength then. But I do today and so let me say loud and proud to all my LGBT brothers and sisters, who embrace me and show me the way to be who I am, thank you so much.” He also thanked his four bandmates, adding, “I was a kid when we came together and I’m a man today because of the family I have and you. I love you guys.”

*NSYNC was inducted by “The Voice” host Carson Daly, formerly of MTV’s “TRL,” and talk show host Ellen Degeneres, who will feature the group on her daytime talk show on May 1, appropriately enough.

The “It’s Gonna Be May” meme elicited rounds of laughter as JC Chasez unexpectedly delivered the line at the microphone.

Speaking to Variety before the ceremony, Bass noted that the original date for the Hollywood Walk of Fame ceremony was supposed to align with the March anniversary of *NSYNC’s debut album. “But because of Justin’s tour schedule we had to postpone it a month,” he said. “It just perfectly happened to be on April 30, and that’s our day.”

Timberlake had just played two sold-out nights at the Forum on his “Man of the Woods” tour.