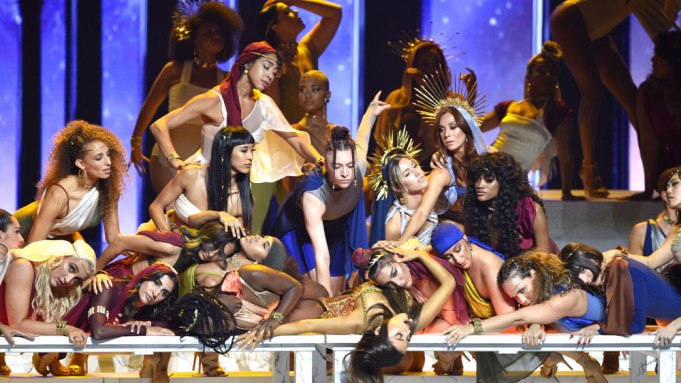 Some 36 hours after Ariana Grande took to the stage at the MTV Video Music Awards on Monday night for a spellbinding performance of “God Is a Woman,” choreographers Brian and Scott Nicholson were still taking in the moment.

The twin brothers — known for their credits dancing with Janet Jackson, Kelly Rowland, Nicki Minaj, and Mariah Carey — have been prominent as head choreographers for Grande as far back as “The Honeymoon Tour,” and put together the elaborate piece featuring 47 dancers in less than three weeks. The set and lighting design were conceived by the creative mind of Leroy Bennett, who worked with Prince for 14 years and is responsible for the designs seen on tours for Paul McCartney, Lady Gaga, Nine Inch Nails, and more.

The resulting visual of the Last Supper brought women of diverse backgrounds literally to the table, and was capped off by the inclusion of Grande’s mother, grandmother, and cousin in an elaborate production with a message of inclusiveness, and a clear presentation of Grande’s vision in the “Sweetener” single.

“It was really important to her, and Scott, and I, to make sure that we not only do a great visual, but also really make it about the power of women, the different variety of women, inclusive of all different types of women, and make a bold statement about beautiful females and what power and vulnerability they have,” Brian said.

At the table were women of all “shapes and sizes,” including a trans woman, a woman who had her breasts removed “because she couldn’t identify with them,” lesbian, straight, bi, and different ages all interacting with each other. Including the Grande family was an idea that happened in final rehearsals, Brian reveals.

“We were all just sitting in rehearsal and we all just talked about how cool it would be to bring her mom up and her cousin and her grandma. And her aunt Judy, who she loved dearly who is not with us anymore, we wanted to make sure she had a great representation,” he said. “It was just so emotional and I think all the women at the very end, coming forward, and then meeting the audience where they sat, being in America, with the world watching. I think standing there at the very end made an emotional impact. And I think it was really cool to see different women up there, but also it made it so personal for her.”

The idea that all are welcome at the table was important to Grande, and care was taken to create “a world” at Radio City Music Hall and to be “in control of what the audiences are seeing and experiencing,” Scott said.

“Ariana loved the idea of the Last Supper visual, so we wanted to play off that,” Brian elaborated. “The entire time, Ariana said that she didn’t want to be the main person, Jesus, so she put herself in just as one of these other women. She made it all about every single woman at the table, which I thought was beautiful.”

Additional thought went into marrying the visual of the piece with the central message of the song.

“Ariana did think about the lyrics, how she sang it, and how she feels,” Brian said. “We find that is how she came across, with more feeling, with the art, rather than looking cool.”

To create the piece, Brian and Scott began to workshop six dances at Debbie Reynolds Legacy Dance Studio in Los Angeles, and got to work selecting women to round out the cast. With just a cheap mock table, the brothers began to work on Ariana’s vision of selecting “every kind of woman” to join her on stage.

“We wanted it to be all about the energy coming across, not necessarily what they look like. We didn’t want to have anybody make an example of them. We just want it to be inclusive. Nothing is a big deal. Everyone is welcome,” Scott added.

The reactions of the audience and on social media were overwhelming, both brothers said.

“As soon as we got off the stage, my phone was blowing up,” Scott said. “My Instagram, everything was going absolutely crazy. I think there’s something definitely special about an artist who’s grown so much and has been here for a little bit. Everything she is doing right now is true and from her heart, and what she has worked on and from experience and emotions, sadness, and tragedies. She really put that into her music and so, it really made this awesome ground, or blueprint for us to create this performance that people automatically connect to, because we’re listening to Ariana, she’s staying true to herself.”

“After this performance, definitely a lot of people hit me up just saying how beautiful it was and I just feel like a lot of people really respected how simple, clear, and artistic it was,” Brian said. “I think Ariana did a great job making her visuals about her music, making her music match her visuals, and she really, really cares.”