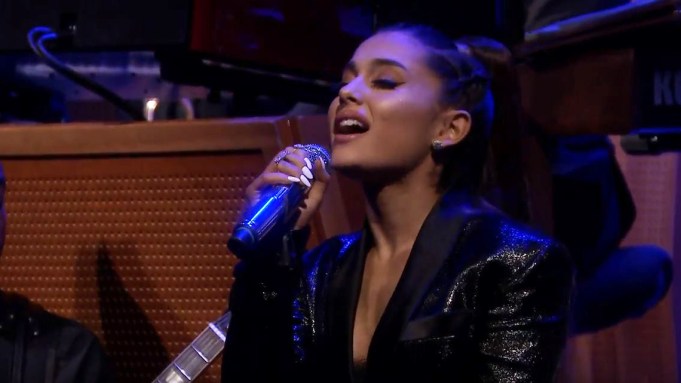 Ariana Grande was only scheduled to do a comedy skit on “The Tonight Show Starring Jimmy Fallon” on Thursday, but ended up bringing the house down with her rendition of Aretha Franklin’s “Natural Woman.”

Grande, known for hits like “Side to Side” and “Love Me Harder,” was on the show to promote her new album “Sweetener,” which debuts at midnight. According to TMZ, producers asked the 25-year-old pop star to perform a song by Franklin as a tribute to the late legend, who died Thursday at the age of 76. Grande originally said she was too emotional to sing, as Franklin was one of her heroes.

However, Questlove apparently persuaded Grande to perform a Franklin song with the Roots, the in-house band for the show. On a dimly lit stage and wearing all black, Grande performed the song from among the Roots. Fans don’t often get to hear Grande sing classic soul, and Grande’s vocals flowed over the song’s notes, an apt memorial to Franklin. After the tribute received a standing ovation, the singer left the stage in tears.

Grande later recalled receiving a phone call from Franklin, who wanted Grande to listen to music from either her nephew or grandson — Grande couldn’t remember which.

Previously the same day, Grande posted a photo of herself with the iconic singer on Instagram and Twitter, as well as a clip of Franklin belting “I Say a Little Prayer.”