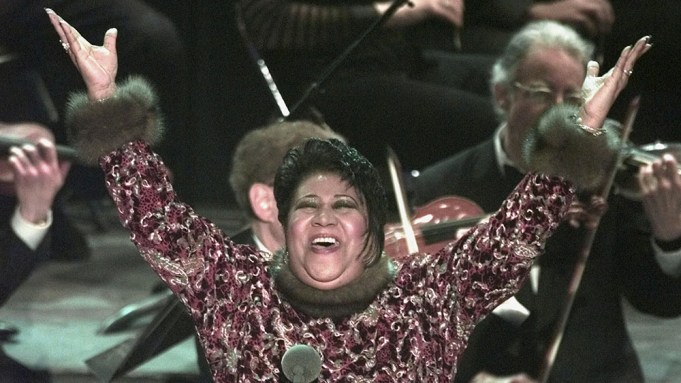 The very first time that Grammy Awards telecast producer Ken Ehrlich worked with 18-time winner Aretha Franklin was on his second-ever awards ceremony in 1981, the initial one held at New York City’s Radio City Music Hall. Franklin sang her nominated song “Can’t Turn You Loose,” which lost out to Stephanie Mills’ “Never Knew Love Like This Before.” Seventeen years later, in 1998, again at Radio City Music Hall, Ehrlich was faced with the last-minute cancellation of Luciano Pavarotti, who was scheduled to sing “Nessum dorma,” the climactic aria from Puccini’s opera “Turandot,” and turned to the Queen of Soul, who had just sung the song a few days prior at the MusiCares Person of the Year dinner honoring the legendary Italian tenor.

“She was just amazing to work with,” says Ehrlich. “It wasn’t always easy, but she always had the right instincts for herself. Every duet was just about perfect.”

Still, Franklin’s greatest Grammy moment came on February 25, 1998, when, 10 minutes into the live telecast from Radio City, Ehrlich, in his bunker below the stage, received word that Pavarotti was too ill to perform that night. “When I called him, he apologized profusely, and told me ‘Ken, I cannot sing for you tonight, but I will come sing for you next year,’ but that didn’t do me any good then.”

Ehrlich scrambled to figure out what to do for the set-piece, which featured a 65-piece orchestra, a 30-voice chorus, and an elaborate production. “My first thought in figuring out what to do with those four-and-a-half-minutes was to ask Stevie Wonder, who was there that night to introduce Pavarotti, to do something. I thought about Sting, and then I remembered that Aretha had sung the song just two nights earlier at the MusiCares dinner.”

The producer bounded up the stairs, grabbed producer Phil Ramone, and headed to Franklin’s closet-sized dressing room, where she was eating a piece of chicken. “I told her about the problem and asked if she’d sing ‘Nessum Dorma.’ She sat for a moment taking it all in and simply said, ‘Yes.’”

That would be Franklin’s second Grammy performance of the night, the first being a rendition of “Respect” with Dan Aykroyd and John Goodman from the just-released “Blues Brother 2000” sequel. There would be only one award presented in between the two slots. Worried about her being able to sing it in Pavarotti’s key, Ehrlich played a cassette of one of the rehearsals on a portable boombox for the iconic performer. “She listened to it as we all sat on the edge of our seats,” said Ehrlich. “And then she simply said, ‘I can do this.’” Pavarotti’s conductor, who wasn’t even aware of what was happening, came into the room, then proceeded to get her ready for the performance.

On that memorable night, Franklin added opera to the Queen’s list of musical genres alongside gospel, soul, jazz, blues, R&B, rock, pop, and even disco.

“After she performed with the Blues Brothers, I ran up the two flights of stairs to her dressing room,” recalled Ehrlich. “I walked her down – she hated stairs – and when we got to the side of the stage, she saw the set-up for the first time, looked over to me and said, ‘Oooh, this is going to be fun.’”

Ehrlich remembered one more telling aside about the diva’s legendary devotion to detail. “She turned to me and asked, ‘Is the air conditioning on, Ken? Turn it off.’ She was cold.”

Reviewing the performance today, the veteran TV producer admitted Franklin “looks and sounds a bit tentative at first,” but things shifted dramatically after that.

“She’d never even rehearsed with this orchestra,” marveled Ehrlich. “But once the crowd realized what was going on and began to respond, it started to soar. She just killed it, she Aretha-fied it. Puccini would be rolling over in his grave. You’d think she was singing it in church.”

For a moment when Aretha finished, there was stunned silence, and then the crowd broke out into a standing ovation.  “I didn’t get to talk to her the next day, when she was still over the moon,” Ehrlich recalls. “She said, ‘I feel like I’m in a dream.’”

Added the Grammy vet: “Virtually every great singing voice, male or female, from 1966 on, has taken a little or a lot from the Queen of Soul. Without Aretha, there would not be an Adele, a Beyonce, a Jennifer Hudson, a Bono, a George Michael or any of the hundreds of other great artists who aspire to emulate her. That instrument, phrasing and ability to sing in front of, on, or behind the beat has been a living tutorial to successive generations of vocalists.

“Her legacy, no matter how the musical landscape changes, will endure, and those of us lucky enough to have had her cross our paths will always remember those moments when she would take off the wrap, head to the stage and the hurricane would begin as soon as the downbeat hit. My bet is that God can’t wait for her to arrive and sing, ‘Amazing Grace.’”