"Everyone in the studio would be in awe of her mastery when she stepped up to the microphone." 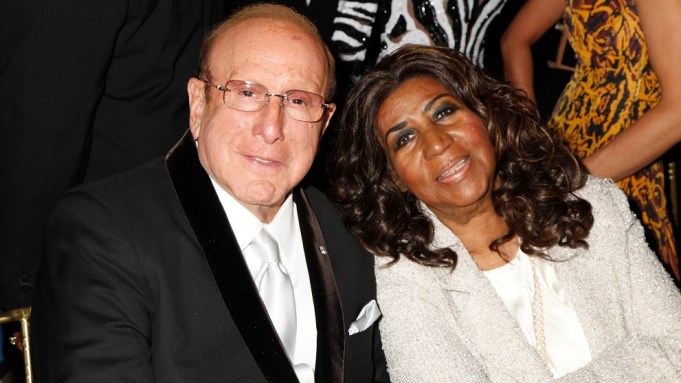 Hundreds gathered at Detroit’s Greater Grace Church on Friday morning to honor the legendary Aretha Franklin, who died on Aug. 16 after a long battle with pancreatic cancer.

Among those closest to the Queen of Soul was Clive Davis, whose long career in the music industry includes nearly four decades during which they worked together. Davis signed Franklin to Arista Records, which he founded in 1974.

Davis delivered a eulogy to Franklin at the funeral. Read it in its entirety below:

When I sat down in her kitchen to have dinner with Aretha in 1979 she was already, of course, The Queen of Soul. She had given the world “Respect,” “Natural Woman,” “Chain of Fools,” “I Never Loved a Man (The Way I Love You),” “Rock Steady,” “Amazing Grace,” “Think” and so much more. We talked into the night about the next five years of recording when Aretha would be over 40 years old. Much of music had changed. Could she still compete? Well, there was no doubt in Aretha’s mind and, frankly, there was no doubt in my mind.

I signed her to Arista Records and five years turned into more than three decades. We were committed to show all budding musicians how long a career can last. For Aretha was indeed a true genius of American music. Every time I was with her, whether professionally or personally, I was conscious that she was, and would always be, a significant part of history.

And so we got to work… year after year, well into her 40s, and well into her 50’s, and beyond. And we had hits like “Jump To It,” “Get it Right,” “Who’s Zoomin Who’,” “Freeway of Love, I Knew You Were Waiting For Me, Sisters Are Doin’ It For Themselves, A Rose Is Still A Rose, Aretha would once again have # 1 records, gold albums, platinum albums and several new Grammy Awards. She relished and cherished every moment of it.

And I was so privileged to be there and personally witness the magnitude of talent of this singer’s singer, this musician’s musician. And let me add for you that behind her God-given, natural talent, was the drive of a total perfectionist. After we decided on the material for an ensuing album, she would go into Aretha mode and privately rehearse, practice and prepare. By the time she came into the studio, she literally owned the song. Everyone in the studio would be in awe of her mastery when she stepped up to the microphone. It was a real rarity if she ever were to do more than two takes. She was in control and she was to nail it.

Plus Aretha was electrifyingly intuitive. We were about to go to Washington D.C. for her to perform at President Clinton’s inauguration. We brainstormed the song and chose “ I Dreamed a Dream” from “Les Miserables” as most appropriate. Flash forward to the performance. She was totally in command right from the beginning, hitting those soaring notes as only she could. Everyone in the audience was transfixed as the performance kept building, and then the one and only Aretha, on her own, spontaneously changed the lyric from “I Dreamed a Dream” to “I Have a Dream” and that instinctive switch to the Martin Luther King mantra made the climax chillingly unforgettable to this day. Aretha was being Aretha, in a class by herself.

So today, on this very special day, permit me to talk of Aretha, the person. Yes, as you’ve heard, Aretha was indeed kind and thoughtful. When she loved you, she really loved you. She was genuinely funny; occasionally with on-the-money topical sarcasm, but she definitely had a keen wit and a great sense of humor. But what stood out, personally to me, was that she really defined loyalty. If I were to ask her to perform at a special event, she was there. Yes, she traveled the country by bus and, in the winter, roads are not very friendly, but she would be there.

One year I was getting a Lifetime Achievement Award at New York’s Waldorf Astoria Hotel and she was telling me she had begun seriously studying something totally new that she had never before tried: she was studying ballet. She refused to tell me anything about the performance that was to come, other than “Clive, it’s gonna knock your socks off, and everyone in the audience’s, socks off. Well, I couldn’t imagine what it would be. And no one there will ever forget it, least of all me.

The night came, the curtain went up, the orchestra started playing, and then Aretha came on, straight-faced, in a tutu. Yes, a tutu. There was the Queen of Soul, accompanied by members of the City Center Ballet Company, she doing well-rehearsed pirouettes and dancing with most impressive agility and dignity. It was wonderful. My friend, Aretha, was going to extraordinary lengths to make sure the night would be a night always to be remembered.

Hopefully, this reveals to you the incredible wide-ranging quest for knowledge Aretha had. She studied classical music at Juilliard. She loved opera and, of course, her performance, without notice, of “Nessun Dorma” at the 1998 Grammys — you never forget it — that truly shows there was nothing she couldn’t inimitably master. And, of course, her commitment to political activism is well-known as is her famous quote: “I have the money. I get it from black people and I want to use it in ways that will always help our people.” And you all know that Aretha did just that for the Reverend Martin Luther King and so many others.

She was a true renaissance woman. She loved art; she loved fashion; and she loved food. Yes, Aretha loved her soul food but, over the years, as she came to New York, the two of us would go to Le Bernardin or The Four Seasons or La Grenouille for the finest cuisine in the most beautiful environment. And although she would no longer fly to Europe, every time I got back from St. Tropez or Capri she would want all the details: what restaurants did I go to? What did I eat? Who was there?

I’m so glad that two years ago I finally purchased Andy Warhol’s great portrait that he did for one of Aretha’s album covers. Yes, I walk by this painting several times each week and I think of the irreplaceable Aretha. I think of her timeless influence on the countless generations to come. But, you know something, there is, and there will always be, a huge void. I will deeply miss that once-in-a-lifetime voice. I will miss her hearty laugh, those endless curiosity questions, that thirst and wonderful hunger for life. Yes, I will deeply miss my great friend, the ultimate natural woman. Aretha, may you rest in eternal peace forever.