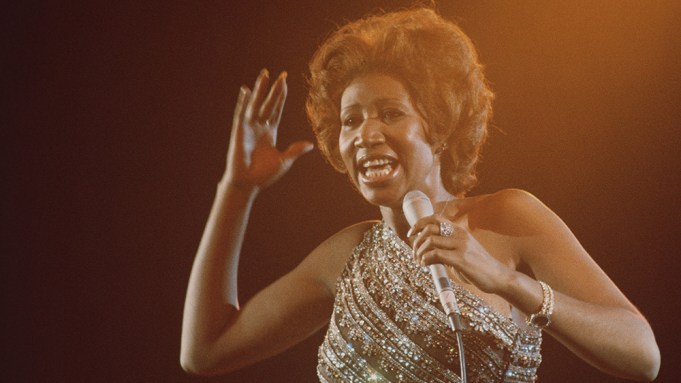 An outpouring of love flooded social media following the death of the Queen of Soul, Aretha Franklin, who died Thursday morning at her home in Detroit after a long battle with pancreatic cancer. Former presidents Bill Clinton and Barack Obama, Paul McCartney, Lionel Richie, John Legend, and Carole King were just a few who paid tribute to the cultural icon.

“America has no royalty.  But we do have a chance to earn something more enduring,” Barack and Michelle Obama wrote in a joint statement. “For more than six decades since, every time she sang, we were all graced with a glimpse of the divine. Through her compositions and unmatched musicianship, Aretha helped define the American experience. In her voice, we could feel our history, all of it and in every shade—our power and our pain, our darkness and our light, our quest for redemption and our hard-won respect.  She helped us feel more connected to each other, more hopeful, more human.  And sometimes she helped us just forget about everything else and dance.”

Richie wrote, “Her voice; her presence; her style. No one did it better. Truly the Queen of Soul. I will miss you!”

King, who collaborated with Franklin and Gerry Goffin on “(You Make Me Feel Like) A Natural Woman,” noted the iconic singer’s legacy. “So much love, respect and gratitude,” King wrote.

What a life. What a legacy!
So much love, respect and gratitude.
R.I.P. @ArethaFranklin https://t.co/400K1U5IHI

President Donald Trump opened a Cabinet meeting on Thursday by saying, “I want to begin today by expressing my condolences to the family of a person I knew well. She worked for me on numerous occasions. She was terrific — Aretha Franklin — on her passing. She brought joy to millions of lives and her extraordinary legacy will thrive and inspire many generations to come. She was given a great gift from God — her voice, and she used to well. People loved Aretha. She was a special woman. So just want to pass on my warmest best wishes and sympathies to her family.”

Franklin performed at the Trump Castle in Atlantic City in the 1980s. POTUS also tweeted a remembrance to Aretha, writing, “She will be missed!”

The Queen of Soul, Aretha Franklin, is dead. She was a great woman, with a wonderful gift from God, her voice. She will be missed!

Former President Bill Clinton and former Secretary of State Hillary Clinton called Franklin a “friend” and “one of America’s greatest national treasures.” Bill Clinton wrote, “For more than 50 years, she stirred our souls. She was elegant, graceful, and utterly uncompromising in her artistry. Aretha’s first music school was the church and her performances were powered by what she learned there. I’ll always be grateful for her kindness and support, including her performances at both my inaugural celebrations, and for the chance to be there for what sadly turned out to be her final performance last November at a benefit supporting the fight against HIV/AIDS. She will forever be the Queen of Soul and so much more to all who knew her personally and through her music.”

In a series of tweets British singer Annie Lennox, who teamed with Franklin on the 1985 version of “Sisters Are Doin’ It For Themselves,” said the “one and only ‘Queen of Soul’ was simply peerless.” “She has reigned supreme, and will always he held in the highest firmament of stars as the most exceptional vocalist, performers and recording artist the world has ever been privileged to witness,” said Lennox. “Her voice will soar forever.”

Beatles legend Paul McCartney said fans should “take a moment to give thanks for the beautiful life of Aretha Franklin, the Queen of our souls, who inspired us all for many many years.” McCartney echoed Lennox’s sentiments when he said the “memory of her greatness as a musician and a fine human being will live with us forever.”

As the One and Only ‘ Queen of Soul ‘ Aretha Franklin was simply peerless. She has reigned supreme, and will always be held in the highest firmament of stars as the most exceptional vocalist, performer and recording artist the world has ever been privileged to witness (1/3)

Let’s all take a moment to give thanks for the beautiful life of Aretha Franklin, the Queen of our souls, who inspired us all for many many years. She will be missed but the memory of her greatness as a musician and a fine human being will live with us forever. Love Paul pic.twitter.com/jW4Gpwfdts

Bette Midler cited Franklin as an inspiration of hers. “The great voice in American popular music has been stilled,” Midler tweeted.

The greatest voice in American popular music has been stilled. Our beloved #ArethaFranklin has gone. For me, she was a musical lighthouse, guiding and inspiring with every note. I loved her so and love her still. Goodbye, Queen of Soul.

Legend called her, “the greatest vocalist I’ve ever known.”

Barbra Streisand reminisced on a 2012 tribute celebration the two performed at together for their friend Marvin Hamlisch. “It’s difficult to conceive of a world without her. Not only was she a uniquely brilliant singer, but her commitment to civil rights made an indelible impact on the world,” Streisand wrote on Instagram.

This photo was taken in 2012 when Aretha and I performed at a tribute celebration for our friend Marvin Hamlisch. It’s difficult to conceive of a world without her. Not only was she a uniquely brilliant singer, but her commitment to civil rights made an indelible impact on the world.

Musician Michael McDonald, who duetted with Franklin, wrote, “She’s one of those iconic artists that cause most people to remember where they were the very first time they heard her amazing voice. She has reached that highest level as an artist where her voice has become, in a collective and spiritual sense, our voice. In a time when art is increasingly considered a secondary human pursuit, she reminds us that it is the very thing that represents our humanity the best. Aretha Franklin is and will always be a national treasure.”

Industry legend Clive Davis, who oversaw many of Franklin’s albums on his Arista label in the ’80s as well as her most recent 2014 record, “Aretha Franklin Sings the Great Diva Classics,” said he was devastated by the news. “She was truly one of a kind,” he said. “She was more than the Queen of Soul.  She was a national treasure to be cherished by every generation throughout the world.  Apart from our long professional relationship, Aretha was my friend.  Her loss is deeply profound and my heart is full of sadness.”

The current co-chairmen of Franklin’s longtime label Atlantic Records, Craig Kallman and Julie Greenwald, said: “Aretha Franklin was a pillar of Atlantic Records and transformed global culture. From that day in January 1967, when producer Jerry Wexler took Aretha to Muscle Shoals, Alabama and she sat down at the piano to record her first Atlantic record, “I Never Loved A Man (The Way I Love You),” music was never the same. Back then, there was no one who sang the way she did, who took the roots of gospel and R&B and infused them with that originality, power, fervor, and depth. Aretha was always in charge – of the songs she sang and the songs she wrote; how she sang them and how she played them. In her dozen years with Atlantic, she created a phenomenal body of work that entered the timeless musical canon and has had an unequaled impact on artists across the globe.”

Another Atlantic Records exec Jerry Greenberg reflected on working with Franklin in the ’70s. “All I can say is she was without question the Queen of Soul,” Greenberg said. “She was always so into her artistry and worked so hard in the studio, where I got a chance to see her in action. ‘Re doing other people’s hits her way and having a hit with that song again was her trademark.”

“Looking out on the morning rain
I used to feel so uninspired
And when I knew
I had to face another day
Lord, it made me feel so tired
Before the day I met you
Life was so unkind
But you’re the key to
My peace of mind.”
Her voice/swagger was peerless.
Thank you, #ArethaFranklin pic.twitter.com/5gp0OP10Jf

Lucky enough to have seen Aretha live exactly once, and this was it.
Thank you for the music, we will be listening to you forever https://t.co/aMHIBFaTAs

The world won’t be the same without you in it.
You will always have our utmost respect. #RipArethaFranklin pic.twitter.com/0DMI3PZfjI

The world lost an incredibly talented woman today. Rest In Peace, @ArethaFranklin… your legacy and music will forever inspire us and future generations 💛 pic.twitter.com/me6FiFo1lM

Playing your many, many anthems on repeat all day. 🎶 Rest in peace #ArethaFranklin #Queen #RESPECT pic.twitter.com/ZXdRM7lUvK

There will never be another Queen of Soul. Aretha Franklin is the embodiment of a soul blessed with a special gift. Grateful we have decades of recordings that will live on. Long Live The Queen. #RIPAretha

Feeling overwhelmingly sad. Thank you Aretha Franklin for the gift of your voice and your soul. Rest in peace.

The wondrous chorus of America at its best has lost a powerful voice. Aretha Franklin shook the heavens and our own complacency with her spirit and by tackling life with power and purpose. #Respect

RIP Aretha Franklin. Thank you for being the sounds of my household as a kid when my mother would clean the house. pic.twitter.com/ihpVdFzbgn

Breaking: Aretha Franklin is dead at the age of 76. The queen is gone.

We mourn the passing of Aretha Franklin, the Queen of Soul. Her voice will keep lifting us, through the music she gave the world. Our thoughts are with her family, her loved ones and fans everywhere. Take her hand, precious Lord, and lead her home. 🎶 pic.twitter.com/I84HTEVZU1

Oh queen oh queen how I cry to see you go. Like so many others I share the sadness of this loss. A true inspiration, a constant listen in my youth. I remember going deep into her B sides and live performances, always in awe of her ability. To discover the effortlessness of her gift, to take it in and experience the tones that shaped my love for singing. Her instrument like no other. Magic, pure magic. Thank you Aretha.

Rest easy #ARETHAFRANKLIN I imagine u in heaven performing & still making people souls move🙌🏾 this was my aunt favorite record #RockSteady you will always be the Queen of Soul you been that before many of us were born! Thank you for giving us LEGENDARY TIMELESS music 🙏🏾❤️ pic.twitter.com/bEueBCLGJ9

Aretha was such a timeless inspiration to me and so many others, the ultimate queen, thank you for the gift of your voice, music and unshakeable soul 🙏🏼 pic.twitter.com/me3FXBY4WZ