American Music Awards: What You Didn’t See on TV 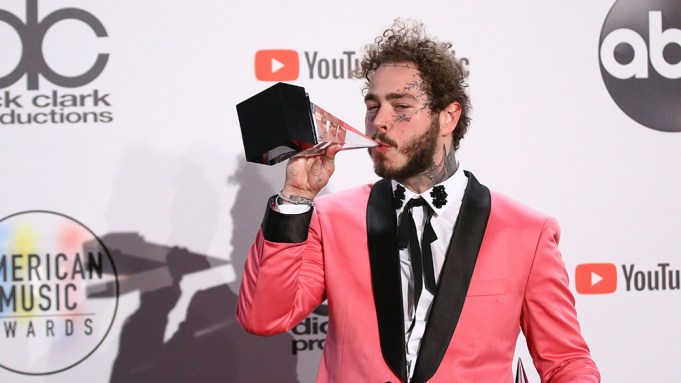 There was no shortage of heat on stage last night at the American Music Awards: From the burning car backdrop of Twenty One Pilots’ performance to the flames that leapt into the air behind Post Malone, the blazing candles encircling Carrie Underwood and the spinning fireworks blazing above Cardi B, not to mention performances by Taylor Swift and Jennifer Lopez that scorched the stage at the Microsoft Theater in downtown Los Angeles. But trust us — what you didn’t see on TV was similarly smoking.

• The backstage “greenroom” was the gathering place for managers, label executives, publicists, friends, and extended family where snacks and drinks were available for all. Rita Ora was seen greeting her label bosses, Warner Bros. CEO Aaron Bay Schuck and COO/co-chairman Tom Corson, with a hug.

• With so many performances on the bill, dressing rooms requirde an overflow area of trailers on top of parking garage adjacent to the theater. But of course, the biggest names had prime positions beneath the stage. There, Mariah Carey and J.Lo were placed in dressing rooms right next to each other, with Taylor Swift situated around the corner.

• After Ms. Carey performed “With You,” her bare-chested male dancers gathered in formation in front of her, blocking the audience’s view of Mimi trying to descend (with considerable assistance from a stage hand) from her plush hot-pink platform.

• A strange convergence of smokers took place just outside the stage loading area, where Macaulay Culkin and Post Malone were puffing away, one more socially than the other.

• In full rockstar regalia, Post Malone was surrounded backstage by a massive posse that included his manager, Dre London, producer Louis Bell and Austin Rosen of Electric Feel Management. Before heading to his own party at West Hollywood’s 1 Hotel, Post Malone tells Variety, “I had a great time. [Now] I’m gonna get drunk. I’m good at that.”

• Dua Lipa‘s performance consisted of two songs in which she’s not the primary performer: Calvin Harris‘ “One Kiss” and Silk City‘s “Electricity.” So executives at Columbia Records, home to both of those artists, teased Lipa’s own label heads with the remark, “Thank you for your contribution.”

• If the AMAs had a homecoming king and queen, it would have been Ashlee Simpson and Evan Ross, who were constantly at each other’s side, both onstage and off. The couple has a fan in actress Kathryn Hahn, who was seen talking excitedly with the two before making her way over to Jessica Chu.

• “Crazy Rich Asians” star Constance Wu puckered her lips to take a selfie with Cardi B. during a commercial break.

• You can’t blame Camila Cabello for rushing back up on stage after performing “Consequences” to accept her new artist of the year award, but she tripped on a step and nearly took a Jennifer Lawrence-worthy pratfall before catching her balance and grabbing her trophy. After the show, her stylist was on hand to fluff her dress while taking photos backstage.

• Practicing until the last possible moment, Ciara was running through her hand moves while making her way to the stage for a performance of “Level Up” with Missy Elliott.

• Carrie Underwood narrowly avoided a spill as the train of her dress gets tangled in a heel but the singer caught herself before any damage was done.

• As Kane Brown typed excitedly into his phone, Taylor Swift was a feet away in a tented area being photographed with her trophies. And then, poof, like magic, she was gone, stealthily exiting out the side and into the night. Brown told Variety he was hopping on a plane after the show to head home to be with his fiance and to put his trophies in his “man attic.”

• Gladys Knight along with Ledisi, Mary Mary, Donnie McClurkin and CeCe Winans took us to church during their all-star Aretha Franklin medley. And this rousing gospel tribute to the Queen of Soul continued on stage for at least five minutes after the cameras officially stopped rolling.

—Marc Malkin contributed to this report