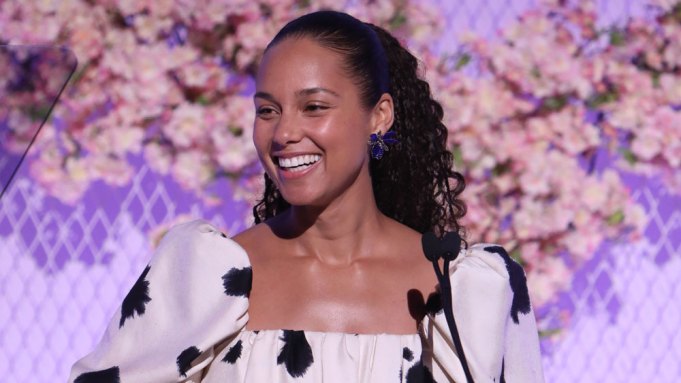 Alicia Keys was honored at Variety’s Power of Women New York for co-launching Keep a Child Alive, a nonprofit aimed at combating the physical, social and economic impacts of HIV. And while she spoke at length about that organization, she also spoke about the day’s theme and the people in the room.

She was introduced by “Good Morning America” anchor Robin Roberts, who said, “She not only changed the world around us, she changed the way we see ourselves. I’ll say it, but I’m not going to sing it — this girl is on fire.”

Keys took the stage, joked about trying to get Roberts to sing, and then said, “We are more on fire than we’ve ever been — and look at all the action that’s around us: women running for office in record numbers, women banding together in the entertainment industry, women demanding an end to disparity in the music industry like equal representation on the Grammy stage,” she said, referencing the low number of women performers during this year’s show and Recording Academy chief’s comment that women need to “step up” in order to get ahead in the music industry.

“We were told we need to step up. Well you feel that step up now?” she said.

Keys also addressed the importance of equal compensation for equal work, pointing to the pay disparity between Claire Foy and Matt Smith on “The Crown.”

“It’s called ‘The Crown,'” she said of the Netflix series. “It’s about the queen. So why is the prince getting more than the queen? So the queens are going to get their paper.”

“Finally the country started listening,” she continued. “I have so much pride in all of us women finding our voice. But this isn’t only women’s work — I saw the men, they were a little shook,” she laughed. “I don’t want them to feel that way because it takes great men, and there are so many of them, who support us in raising our voices to make this cultural change happen.”

She spoke about her first manager Jeff Robinson. “In meetings, he made sure I had a seat at the table. I was 14, and Jeff treated me like an equal. It takes that from men and women alike to shift this once for all.”

She thanked her mother — “a true woman of power” — and referenced Anita Hill as a “founding mother of the current moment and the courage it took to do what she did.” She also spoke out against police violence against blacks, and of course the strength of the women she’s worked with in Keep a Child Alive.

“I’m telling you all this to share stories about truly culture-rocking women,” she concluded. “I’m so honored to be standing here with you all, because you are warriors, agents of change. And I accept this honor on behalf of all the women who have never been recognized in the way they ought to be: You are all incredible women of power.”

Speaking to Variety for this week’s Power of Women issue, she credited her first trip to South Africa 16 years ago as the spark that ignited her passion for helping others in need, as she performed a charity concert in Cape Town as part of MTV’s HIV prevention and awareness initiative, Staying Alive. She toured the country meeting survivors of the epidemic.

In Soweto, specifically, she encountered children orphaned by AIDS who were forced to raise their younger siblings — effectively becoming the heads of their households. She described how many of the young girls in this position were pushed into the sex trade for survival. “They were just a few years younger than me. So I was like, ‘What if this was happening to me, and nobody listened to me, nobody cared?'” She came back ready to do something. The trip “gave me a new purpose. I was like, if we could do something, I’m in.”

Keys co-founded Keep a Child Alive with activist Leigh Blake shortly thereafter in 2003. The intensely community-oriented charity supports six grassroots organizations throughout Africa and one in India, with an eye to holistic approaches that address the socioeconomic roots of the epidemic and honor individuals with the disease.