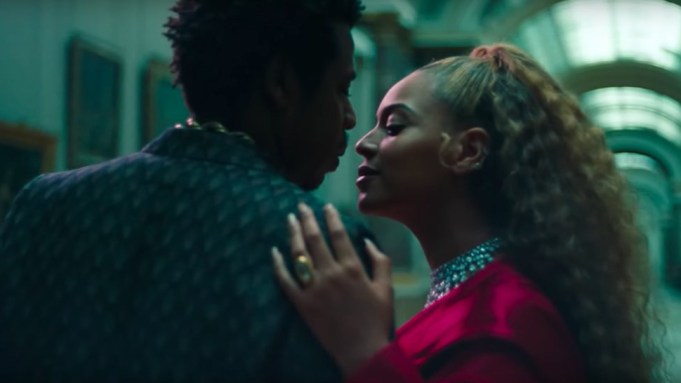 At press time, the one song from Jay-Z and Beyonce’s surprise tag-team album available to non-Tidal subscribers is the single and video, “Apes—.” The Ricky-Saiz-helmed clip was filmed in the Louvre in Paris last month, and echoes both Beyonce’s recent work — with the synchronized dancing and moody, soft-focus stills — and Jay’s “4:44” videos with its epic, “Godfather”-ish feel.

The video features the pair posing in various settings in an oddly empty Louvre, delivering their lines in front of centuries-old masterpieces, even the Mona Lisa. The clip also features dancers performing synchronized moves on the museums steps, and Beyonce and several dancers gyrating in front of famous paintings. The song also may feature one or all three members of Migos, although credits were not available at press time.

Yet the song’s lyrics raise even more eyebrows, with Beyonce completing a verse with the line “Get off my d–k” and Jay-Z calling out both the Super Bowl and the Grammys in his verses in the middle of the song, referencing both his refusal to perform during halftime of the 2018 Super Bowl and him receiving zero Grammy awards despite eight nominations earlier this year: “Tell the Grammys f— that 0 for 8 s— / Have you ever seen the crowd goin’ apes—?”

“I said no to the Super Bowl
You need me, I don’t need you
Every night we in the endzone
Tell the NFL we in stadiums too
Last night was a f—ing zoo
Stagediving in a pool of people
Ran through Liverpool like a f—ing Beatle
Smoke gorilla glue like it’s f—ing legal
Tell the Grammy’s f— that 0 for 8 sh–
Have you ever seen the crowd goin’ apesh–?”