Hillary Clinton Reads ‘Fire and Fury’ at the Grammys (Watch) 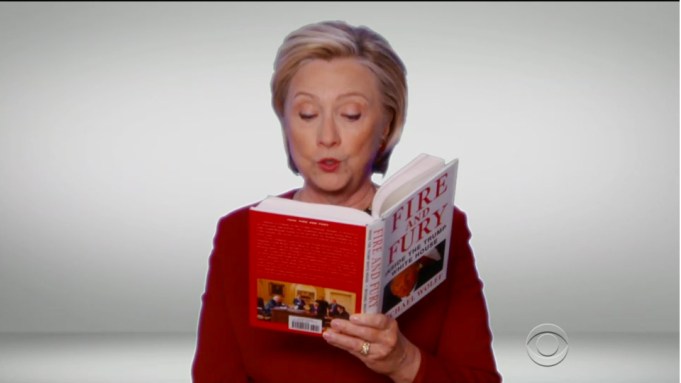 That’s what host James Corden was hoping for, after a pre-taped segment during Sunday night’s award show where he had the 2016 Democratic presidential candidate read excerpts from Michael Wolff’s book, “Fire and Fury,” as part of a spoken word audition spoof. Clinton was shown reading from of the bombshell Donald Trump book, first with her face hidden and then revealing who she is.

“He had a longtime fear of being poisoned, one reason why he liked to eat at McDonald’s. No one knew he was coming, and the food was safely pre-made,” she reads.

Corden assures her she nailed the audition and a spoken word Grammy is “in the bag.”

Also “auditioning” for the “Fire and Fury” gig in the clip were John Legend, Cher, Snoop Dogg, DJ Khaled and Cardi B, who questions, “why am I even reading this s—?”

The 60th annual Grammys return to New York this Sunday for the first time in 15 years and feature performances from nominees Kendrick Lamar, Bruno Mars, Kesha, and Pink. The show will be broadcast live from Madison Square Garden at 4:30 p.m. PT/7:30 p.m. ET on CBS. “The Late Late Show” host Corden returns to emcee the ceremony for a second year.