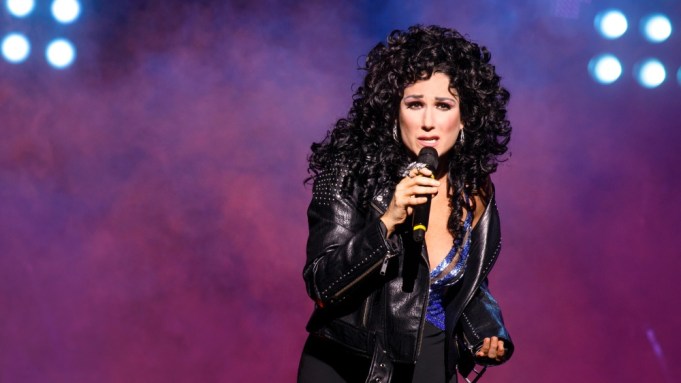 Choosing to recreate the spirit of the television variety shows that Sonny and Cher — and then Cher sans Sonny — headlined in the ‘70s is a choice that lands as flat as the jokes in Broadway’s latest jukebox bio, “The Cher Show.” Its attempt to celebrate the resilience of its “bad-ass” star and her half-century career of highs and lows rarely rises above that TV series’ taste for cliches, corn and cheese. Despite an icon with attitude, an armful of pop tunes and a can-do cast, the script never quite finds a satisfying style — or a genuine heart — as a winning stage musical. As Cher might say: Broadway’s a bitch.

You know a show’s in trouble when the moments that elicit the biggest applause of the night don’t even feature its title character. There’s a mini-fashion show featuring over-the-top outfits by original Cher designer Bob Mackie — who created the costumes for the musical — that’s a stunner of shameless excess. There’s also a dazzling number choreographed by Christopher Gattelli featuring a knockout dancer (Ashley Blair Fitzgerald) representing “The Dark Lady” of one of Cher’s songs.

As for the title character, a trio of actresses play Cher at various stages of the star’s career, echoing the threesome approach of the soon-to-be-shuttered Donna Summer musical. Here there’s a bit more banter in Rick Elice’s sketchy, every-scene-is-a song-cue script. The trio of cool babes wisecrack about each other’s life and career choices, buck each other up and repeat the same talking points again and again. (Cher’s really shy, but she’s also a “goddess warrior,” but she’s also a victim of manipulative men, but she also chooses her own destiny. Always, the songs make her strong, see? And they go something like this…)

“Star” Cher (Stephanie J. Block) opens the musical as if it were her TV show with “If I Could Turn Back Time” (minus the iconic cannon straddle), and then introduces her fellow selves to the audience — “My two very special guest stars: me and me” — “Lady” (Teal Wicks, representing mid-career Cher ) and “Babe” (Micaela Diamond, for the early years).

The tone of the show, directed by Jason Moore (“Avenue Q,” “Pitch Perfect”) veers from playfully self-aware to broad comedy to melodrama. (“Won’t you please stop drinking for my sake?” asks Cher’s mother, Georgia Holt, to her then-husband. “Who says I’m drinking for your sake?” he responds.)

What “The Cher Show” rarely does is get real, despite the tell-it-like-it-is attitude of its subject. It only takes itself semi-seriously, keeping genuine emotion at arm’s length. The audience witnesses all of Cher’s struggles — including the dip into infomercial-land — and triumphs, but is not especially moved by them, since it’s filtered through the obviousness of the script and the cool aloofness of its protagonist.

The pleasures in the show come from individual performances, including Jarrod Spector, spot-on as Sonny Bono and capturing the man’s charm, calculation and nasal twang. (But did he really have those abs?) Emily Skinner is terrific as Cher’s mother, the tough-but-tender Georgia Holt, but is bizarrely misdirected in a turn as a clownish Lucille Ball.  Michael Berresse has flamboyant fun as Bob Mackie and Matthew Hydzik nails Gregg Allman’s sound — and a hair sway that rivals Cher’s.

Keeping the show afloat are the strength of its combined Chers, who each give us just enough of the low vocal treble to evoke the star while hanging on to her own individuality. Diamond highlights the freshness, excitement and naiveté of youth; Wicks, the deadpan humor and personal conflicts of mid-career Cher. Broadway veteran Block showcases seasoned assuredness and chops as the older, wiser Cher, who finally becomes a woman who finds the courage to live up to her empowering persona.