Tony Winner Ari’el Stachel Delivers Powerful Speech: ‘For So Many Years, I Pretended I Was Not a Middle Eastern Person’ 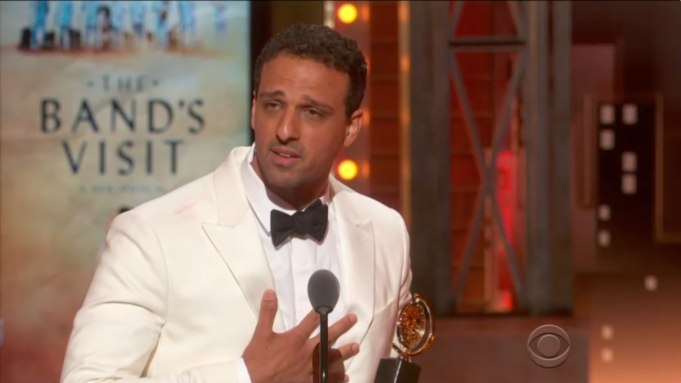 In one of the night’s most emotional moments, “The Band’s Visit” star Ari’el Stachel dedicated his Tony award for featured actor in a musical to his parents, who were in the audience during Sunday’s show, along with the Middle Eastern children around the world for their support.

“I have avoided so many events with them because for so many years of my life, I pretended that I was not a Middle Eastern person,” Stachel said through tears. “After 9/11, it was very, very difficult for me. And so I concealed, and I missed so many special events with them. And they’re looking at me right now, and I can’t believe it.”

“The Band’s Visit” tells the story of an Egyptian police band that mistakenly finds themselves stranded in a small Israeli town. Based on the 2007 film, the acclaimed musical about overcoming ethnic barriers particularly resonates at a moment when tensions are rising in the Middle East. The production, co-starring Tony Shalhoub and Katrina Lenk, opened on Broadway in 2017. It received 11 Tony nominations, winning 10, including best musical.

“I am part of a cast of actors who never believed that they would be able to portray their own races, and we are doing that,” Stachel said. “And not only that, we are getting messages from kids all over the Middle East thanking us and telling us how transformative our representation is for them.”

He added: “I want any kid who is watching to know that your biggest obstacle may turn into your purpose. Thank you very much.”