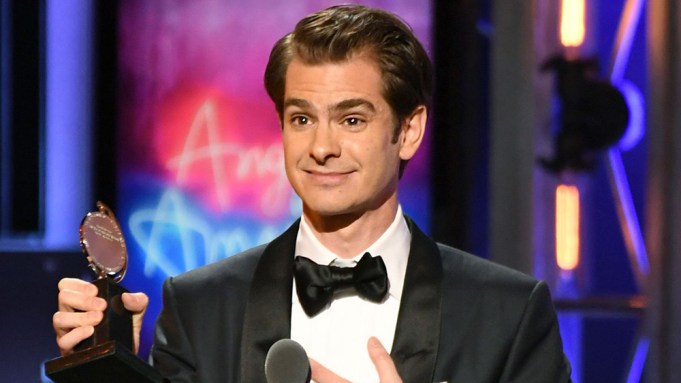 “Harry Potter and the Cursed Child, Parts One and Two” nabbed best play and “The Band’s Visit” was recognized as the best musical in an emotional Tony Awards that mixed Broadway razzle-dazzle with politically charged calls to arms.

“Angels in America,” a sprawling two-part drama about the AIDS crisis, was named the year’s best play revival. The honor, one of three statues it picked up on Sunday, came roughly 25 years after the original production of “Angels in America” swept the 1993 Tonys.

Sunday was also a night of upsets. In one notable bracket-buster, “Once on This Island” was named best revival of a musical over the heavily favored “My Fair Lady” and “Rodgers & Hammerstein’s Carousel.” It was the only award the show picked up out of its eight nominations.

Ostensibly a celebration of theater, the Tonys were an opportunity for Broadway to talk up the virtues of inclusion and diversity, while also drawing attention to gay rights, gun control, and the challenges facing immigrants. Most of those messages were delivered eloquently and empathically, others came festooned with four-letter words. While introducing a performance by Bruce Springsteen, for instance, presenter Robert De Niro said “f— Trump” twice, sending CBS censors scrambling to bleep his off-color remarks. Stage hands inside the Radio City Music Hall looked visibly stunned even as the crowd of actors, producers, and directors in the audience rose to their feet in support.

De Niro’s fiery words are the most likely to elicit a Twitter response from President Donald Trump, inspire cable news pontificating, and lead to scores of think pieces. They were, however, something of an anomaly. Most winners and presenters avoided mentioning the president or Trump-ism by name, while making it clear that their sympathies are with the resistance. Many wore pins trumpeting movements such as Time’s Up or ribbons highlighting left-leaning organizations such as the ACLU.

Tony Kushner, the playwright behind “Angels in America,” was one of the broadcast’s more explicit agitators, urging people to get out and vote in the midterm elections in November and telling viewers they have “21 weeks to save our democracy and heal our planet.”

He wasn’t alone in sounding a note of alarm. Andrew Garfield, the best leading actor in a play winner for his work as Prior Walter, the AIDS-stricken prophet at the center of “Angels in America,” tweaked the Supreme Court for upholding the right of a Colorado baker to refuse to bake a cake for the marriage of a same sex couple. “Let’s just bake a cake for everyone who wants a cake to be baked,” Garfield said.

Best actress in a play winner Glenda Jackson, recognized for her turn as a senile doyenne in “Three Tall Women,” praised the multi-cultural nature of the theater business.

“There are people in this audience, in this country, in this city from every other country in the world,” said Jackson. “And you, as always, are welcoming and kind and generous, and America has never needed that more, but then America is always great.”

It wasn’t just the substance of the speeches that made this edition of the Tonys seem more ideologically animated. Many of the shows that were recognized grapple with political issues that have resonance with modern day events. “Angels in America,” unfolds in the 1980s as AIDS was killing off a generation of gay people — it was also a time in which a more aggressive form of conservatism was on the rise.

Likewise, “The Band’s Visit,” the story of a group of Egyptian musicians who find themselves bonding with the residents of a small Israeli town, is a plea to tolerance and brotherhood at a moment when tensions are boiling over in the Middle East. The stage version of a 2007 film of the same name earned a leading 10 wins, including statues for leading actor in a musical (Tony Shalhoub) and leading actress in a musical (Katrina Lenk).

“Angels in America’s” Nathan Lane nabbed a best featured actor statue for his performance as Roy Cohn, a venal power-broker who was a mentor to President Trump. Calling “Angels in America” one of the greatest plays of the 20th century, Lane said, “”it is still speaking to us as powerfully as ever in the midst of such political insanity.” It was Lane’s third Tony win. He had previously been honored for “The Producers” and “A Funny Thing Happened on the Way to the Forum.”

Garfield, Jackson, and Lane weren’t the only performers to sound activist notes in their acceptance speeches. Lindsay Mendez, picking up the Tony for best featured actress for her work in “Rodgers & Hammerstein’s Carousel,” noted that she was told to change her last name to Matthews when she first started working professionally. She refused.

“I want to say how proud I am to be part of a community that celebrates diversity and individuality,” said Mendez.

Choking back tears, best featured actor in a musical winner Ari’el Stachel (“The Band’s Visit”) said he had masked his Middle Eastern heritage after 9/11, even avoiding bringing his parents to events. That changed in part with “The Band’s Visit,”and its portrait of Arabs and Israelis uniting over their shared humanity.

“I’m part of a cast of actors who never believed they’d be able to play their own races and we’re doing that,” said Stachel. He closed with a message to younger viewers, telling them “Your biggest obstacle may turn into your purpose.”

Stachel’s director David Cromer was also honored for his work on the play, and used his time to send a message to people suffering from depression. “The Band’s Visit” centers on people who have lost hope, he said, beseeching those who are suffering to “call out.” His speech came days after celebrity chef Anthony Bourdain and fashion designer Kate Spade committed suicide.

“Three Tall Women’s” Laurie Metcalf won her second Tony Award in as many years for best featured actress in a play. She picked up the lead actress statue in 2017 for “A Doll’s House, Part 2.”

Co-hosts Sara Bareilles and Josh Groban kicked off the ceremony with a spirited opening number that poked fun at their combined lack of awards recognition. Noting that 90% of people in the audience would go home losers, they comforted the Tony-less by noting, “in a world that is scary and hard to endure if you make art at all you’re part of the cure.”

Bareilles and Groban appeared sporadically over the course of the three-hour telecast, leaning heavily on their musical talents instead of embracing a more joke-oriented approach favored by past hosts. In addition to keeping the show moving, they were tasked with banishing all memories of last year’s emcee, Kevin Spacey, whose career has imploded in the wake of sexual harassment allegations.

Though congenitally ratings challenged, the Tony Awards are seen as an important opportunity for Broadway shows, particularly musicals, to goose their ticket sales. “My Fair Lady,” “SpongeBob SquarePants,” “Frozen,” and “Mean Girls” were among the shows that offered up lavish numbers during the telecast with an eye towards converting viewers at home into future audience members.

The telecast didn’t lack for star power. Denzel Washington, Tina Fey, and Amy Schumer were all nominated and appeared during the broadcast. Springsteen, currently packing them in with his intimate show “Springsteen on Broadway,” was honored with a special Tony Award at the beginning of the broadcast, presented to him by fellow rocker Billy Joel.

But the biggest show-stopper, and one of the emotional highlights of the night came from performers who aren’t household names. Members of the drama department at the Marjory Stoneman Douglas High School, survivors of a school shooting in Parkland, Fla. that claimed the lives of 17 people, received a thunderous ovation for their rendition of “Seasons of Love” from “Rent.”

It fell to Kushner to sum up the meaning of this year’s Tonys — making sense of both the fiery jeremiads and the moments of reflection — during a backstage press conference immediately after “Angels in America” won best revival.

“The theme of the show is about devastation and communities in pain, and various possibilities of healing, starting with the Parkland kids,” said Kushner, adding, “Our democracy is very old, 200 and whatever years old, and I think it’s going to survive this dreadful blight.”