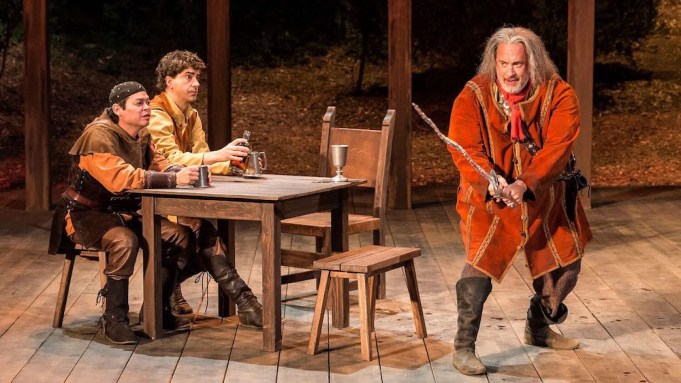 UPDATED: A few scenes into Wednesday night’s performance of Shakespeare’s “Henry IV,” Tom Hanks had to go off script. Attempting to entertain the audience while a crowd-member fell ill, the Oscar-winning actor projected, “No intermission brew for you!”

“An audience member became dehydrated and had to be taken out,” Heath Harper, Hanks’ theatrical dialect coach, told Variety.

According to a representative from the production, a patron was reported unconscious and sweating. The play was halted and 911 was called. One of the crew members with medical training assisted the audience member until they regained consciousness and the paramedics arrived. The medics performed tests on the guest in the crossover under the seats. Because this is the actor crossover as well, the show could not restart.

“An ambulance was called, so we had to stop the show for about 20 minutes. As the minutes ticked by, the audience became a little restless,” Harper explained. “Finally, Tom decided to just hit the stage [in costume] and vamp, in character.”

Never breaking from his tragicomic role of Falstaff, Hanks addressed the crowd and even started pulling people on stage. When Harper realized what was happening, he dropped his script and recorded the above video.

“I’ve never seen anything like it,” Harper said. “It credits the work we’ve done and Tom’s commitment to the character that he was able to just jump on the stage and improv as Falstaff like that. The audience absolutely ate it up and loved every minute.”

Indeed, performing as the father figure to Hamish Linklater’s Prince Hal in the abridgment of Shakespeare’s “Henry IV” Parts 1 and 2, Hanks addressed the “scurvy rogues who stood up from their seats” to leave during the 20 minute pause, describing their departures as an “insult to all actors and to Shakespeare himself.”

The video also shows Hanks-as-Falstaff warn: “Get back here or find this sword and many a dagger placed neatly in the tires of your carriage” to laughs from the still-seated audience members.

Hanks then returned back to center stage, inviting audience members to “come sit here, and I shall give thee a haircut,” he offered.

He called out to one woman in the audience, urging her to “give me back my costume.” After Hanks beckoned her to sit in the chair onstage, she disclosed how she came to the show from Burbank. Hanks then bowed to her in deference, congratulating the fact that “my lady, you have crossed the 405.”

Once Hanks and the production team received word that the audience member had recovered, “the show went on and the crowd was completely behind us to the end, giving us standing ovations all around,” Harper said.

“All in all, I think it was a fantastic true-to-Shakespearean moment in LA,” Harper said. “The crowd definitely got their money’s worth.”

Evening performances of “Henry IV” run Tuesdays through Sundays at 8 p.m. at the Japanese Garden on the West LA VA Campus from June 5 to July 1.