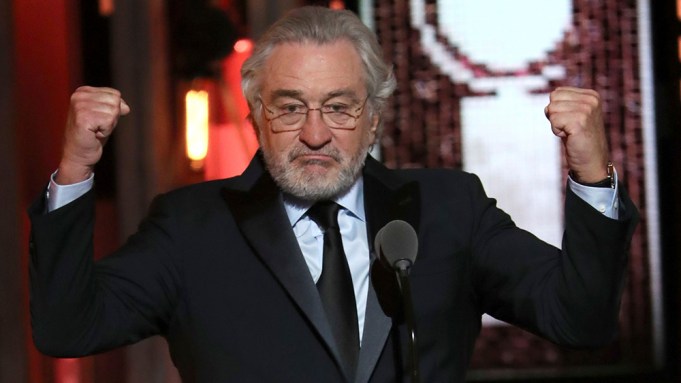 Robert De Niro had a few choice words for President Donald Trump while the legendary actor was on stage at Sunday’s Tony Awards to introduce Bruce Springsteen’s musical performance.

The political sentiment earned De Niro a standing ovation from the crowd at Radio City Music Hall, while CBS scrambled to bleep the audio on the live telecast. After the audience settled, De Niro got back to talking about Springsteen, who received a special Tony Award during Sunday night. The exclusive concert residency, “Springsteen on Broadway” — or as De Niro referred to it, “Jersey Boy” — features the Boss performing his music and sharing stories from his 2016 autobiography “Born to Run.” Tickets to the intimate concert are upwards of $850. The limited engagement run has been extended twice through Dec. 15.

So when De Niro finally got the call to see Springsteen play live, he said ‘yes without asking any questions.”

“Bruce, you can rock the house like nobody else,” he said. “And even more important in these perilous times, you rock the vote, always fighting for, in your own words, ‘Truth, transparency, and integrity in government.’ Boy, do we need that now.”

Springsteen then took the stage to perform a soulful rendition of “My Hometown,” while playing the piano. During a spoken word adaptation, Springsteen shared memories of growing up in Freehold, N.J., and discussed growing up “literally surrounded by God and all my relatives.” Earlier during the telecast, Springsteen received a special Tony, presented by Billy Joel.