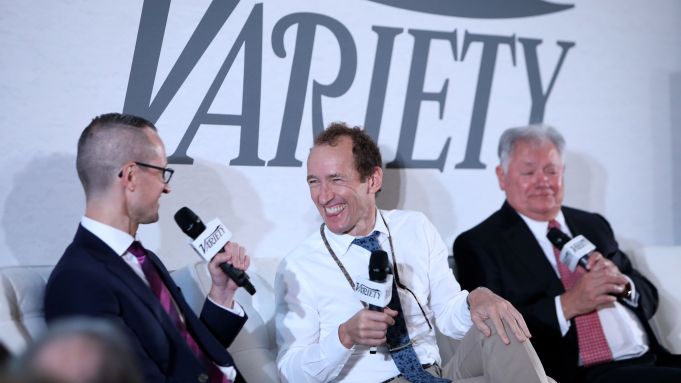 In the age of streaming — and with studios like Disney and Warner Bros. taking over more theater turf — it’s clear that the landscape of American theater is changing. At Variety’s inaugural Power of Broadway event, which took place over breakfast at Bryant Park Grill on Monday, legit biz leaders weighed in on what that means for producers, artists and audiences in 2018 and beyond.

On the “Future of Broadway” panel, producer Sue Frost, Ambassador Theater Group’s Kristin Caskey, and Withumsmith + Brown’s Robert Fried discussed the various paths to the Great White Way. With the rising cost of more traditional out-of-town tryouts, it can be difficult to determine when a play is ready for Broadway — and to take the development time needed without going over budget. “The amount of time you have to build has grown shorter,” said Caskey, the producer of “Fun Home.” But that investment is still vital, both to generate momentum and to allow the show to find its footing artistically. As Caskey noted, “Fun Home’s” developmental period led to changes that were crucial to its ultimate success.

Frost, for her part, took “a very slow trip” with “Come From Away,” knowing it had a difficult road ahead as “the 9/11 musical” with no name recognition and an ensemble cast. By the time it came to New York, she said, “over 250,000 people had seen the show — and thanks to social media, they were talking about it.”

Viral sensations like “Be More Chill” represent another potential route. As Frost told Variety after the panel, a cast album that finds its audience online (to the tune of 200 million streams, in the Joe Iconis musical’s case) may be able to bypass a more exhaustive out-of-town trial run. “Why not? Especially if it works!” she said, laughing. “And if it doesn’t, then it’ll just be [a question of] what it will teach us and where it’ll take us.” While producers should always be open to new ways of reaching an audience, she cautioned against the rush to replicate current hits: “You have to look at what your show needs.”

Given these scrappier success stories, the producers on the panel, moderated by City National Bank’s Erik Piecuch, were unfazed by the increasing presence of studios like Fox and Warner Bros. on Broadway. Frost is confident that there will always be space for original shows to make their mark, and Caskey named the studios as a factor in the current health of the industry. “Disney and others have brought us into a time where we have the room to have ‘brand-name’ titles next to shows like ‘Come From Away’ and ‘Dear Evan Hansen,’” she said.

For those without the backing of major studios, international collaborations can offer a different way forward. Producers are increasingly looking to London as a tryout space, and the inclusion of partners from the U.K. and Australia who were just as passionate about the work (and just as knowledgeable about their country’s theatrical landscape) paid off for “Come From Away.” As of next year, the show will have five productions around the world.

Plays are also reaching new audiences through streaming services like NT Live. “Not everyone can afford the theater, and it’s a way to get the art form out there, and to give people a chance to see it who wouldn’t otherwise see it,” said Fried. “It’s an endeavor worth pursuing.”

Caskey noted that it could also highlight work beyond Broadway: “Across the country, there are fantastic regional theater productions, and it would be lovely if we could find a way to elevate the scope of what’s seen and what’s out there.”

The search for stories that reflect the nation as a whole was also central to the keynote conversation between Jeffrey Seller (producer of “Hamilton” and “Rent”) and Shubert Organization president Robert Wankel, moderated by Variety‘s Gordon Cox. Seller reflected on the motivation of the late composer Jonathan Larson when writing “Rent” in the era of the British invasion musicals: “He said, ‘Those aren’t my stories, those aren’t my characters, that’s not my music. Why would I go to Broadway?’ … “Rent,” for him, was the antidote.”

Jeffrey Seller remembers Jonathan Larson's impact on Broadway: "#Rent for him was the antidote. He wanted to write a show that was for his group, for young people" #PowerOfBroadway pic.twitter.com/eYEl66ThqY

The result was a musical that shifted Broadway’s demographic dramatically — a mission that Seller considers central to his own role today. “Our work is to continue to expand our audience – to make our audience look like our country,” he said. “I’m cognizant of the fact that because of price barriers, communication barriers, the “Hamilton” audience is probably still too white.” He highlighted the show’s Education Program as an important start in redressing this; it’s the kind of initiative he hopes to see more of going forward.

Though the digital revolution poses clear challenges elsewhere in the entertainment industry as networks compete with new platforms and streaming services, Seller believes that it has made theater “even more integral to our lives.” People will always seek out live events, he argued, and greater access to the work itself can only be a good thing. “We’ve had now two billion streams [of the “Hamilton” cast recording], and that was the way in which “Hamilton” was able to seep into the American culture in such a profoundly positive way faster than any show heretofore had.”

When asked what he would say to the next generation of producers, Wankel’s message was similarly optimistic: “There’s never been a better time.”