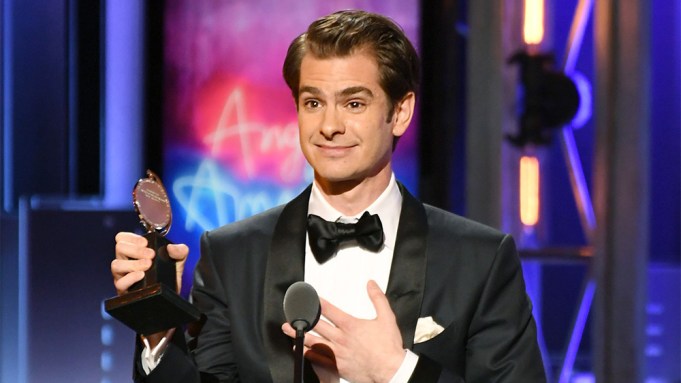 Andrew Garfield shared his Tony statue for lead actor in a play with the LGBTQ community.

Garfield won for his role as Prior Walter, a gay man with AIDS, in Tony Kushner’s two-part epic, “Angels In America.” The eight-hour revival examines AIDS and homosexuality in America in the 1980s.

During his acceptance speech, Garfield also nodded to the recent Supreme Court decision that sided with a Colorado baker who refused to make a wedding cake for a gay couple on religious grounds.

“We all belong, so let’s just bake a cake for everyone who wants a cake to be baked!” Garfield said. “We all belong. So I dedicate this award to the countless LGBTQ people who have fought and died to protect that spirit, to protect that message for the right to live and love as we are created to.”

In addition to his family and Kushner, Garfield gave a nod to the “incredible company” of “Angels in America.”

“You are all geniuses in your own right,” he said. “I bow to you so deeply. You inspire me every day.”

This was the second Tony nomination and first win for Garfield. He was previously nominated for 2012’s “Death of a Salesman.”