Tina Fey on the Lasting Legacy of ‘Mean Girls,’ Its Road to Broadway and Time’s Up 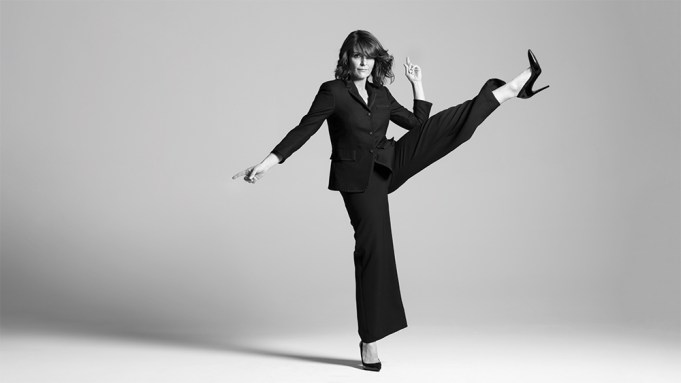 Tina Fey wrote “Mean Girls,” but she’s no Regina George. On the first day of rehearsals for her new Broadway musical, based on the 2004 hit comedy, she had a message for her cast of ingenues: Avoid the trappings of fame. That meant no diva-like behavior in real life. If they felt like straying, Fey asked them to think of one thing. “Picture my face as your mom, saying, ‘Please don’t do that!’” Kerry Butler, who plays the teacher Ms. Norbury, recalls Fey telling them.

This spring, a lot of fans will be enrolling in Fey’s high school musical. “Mean Girls” is the breakout production of the season, earning a robust $4.1 million in its first three weeks of previews. When “Mean Girls” opened in movie theaters, the film’s message — of not tearing each other down to simply feel better about yourself — spoke strongly to teenage girls. Now it applies to everyone, given that we have a president who sends vile tweets from the White House.

“It has metastasized,” Fey says on a recent afternoon. She describes a theme from the movie — “Calling someone a loser doesn’t make you a winner” — that could serve as an antidote to the animosity in our culture. “It’s so incredibly obvious, but still, apparently, we need to be reminded,” she says. “We all do it, on both sides. Once you’re laying the mud, you’re all the mud.” She shrugs off any direct comparisons between “Mean Girls” and politics: “People have connected it. I think I’ve seen somebody on Stephanie Ruhle’s show on MSNBC say, ‘Look at the “Mean Girls” behavior among the administration.’ Sure, if that works for you.”

While the movie business is overrun by comic-book adaptations, some big-screen comedies still have the magic touch on Broadway. Known properties like “School of Rock,” “Waitress” and “Kinky Boots” are all turning nifty profits. Next year, theatergoers will have a chance to taste “Beetlejuice.” That’s why “Mean Girls” is a no-brainer onstage. The film, which grossed nearly $130 million worldwide, became the “Sixteen Candles” of its generation, turning Lindsay Lohan into an A-list star and launching the career of Rachel McAdams (who played the ultimate Queen Bee, Regina George). It also inspired endless YouTube tributes and GIFs backed by lines like “Stop trying to make fetch happen!”

Fey has caught the repeat showings of “Mean Girls” on cable. “I think so much of that credit goes to TBS,” she says about the movie becoming a classic. “Isn’t it always on TBS? Thank you, TBS!” Over the years, producers would tell Fey and her husband, composer Jeff Richmond, that “Mean Girls” would make a great musical. There were rumblings that someone else wanted the rights. “I don’t want anyone doing it who is not me,” Fey remembers thinking. It was 2013, and her Emmy-winning series “30 Rock” had come to an end after seven seasons. “Right around that time, we saw ‘Book of Mormon,’ which was so funny. And obviously, very different from this because it’s a glorious hard R. We were inspired. People from TV” — Trey Parker and Matt Stone from “South Park” — “came in and really conquered the form.” Fey enlisted her “Saturday Night Live” friend Lorne Michaels (a producer on the film and musical) to help secure the rights from the late Brad Grey, then the CEO of Paramount Pictures.

“I think it works, because it’s a continuation of Tina’s thinking and sensibility,” Michaels says. “The reason it resonated and did so well, there was something honest and funny and certainly recognizable.” Michaels says that he learned from his 20-year-old daughter that fans were celebrating Oct. 3 as “Mean Girls Day,” based on a line of dialogue in the film.

Everyone told Fey it would take five years to write a musical. Fey thought since she came from TV, she’d work faster. But sure enough, it took five years. At first, she wasn’t certain what exactly a book writer did. She even resorted to Wikipedia for research on the qualities of a second-act opening number. “We initially fell into the trap of making it all sound like pop music, because it was girls in high school,” says the musical’s composer, Richmond (the couple are known to perform Christmas carols together at their holiday parties). “Then we started to think of all the characters in the world of high school.” For Regina’s big anthems, they imagined music that would be associated with a Bond villainess.

Fey spent last fall in Washington, D.C., where the musical had a trial run, turning out many revisions. More recently, she attended every preview performance, usually pacing in the back. “I don’t want to be a distraction,” says the Emmy-winning writer and actress, who grew up loving musical theater. “It’s funny, because I go to Broadway shows all the time. No one cares. Because it’s this, if they see me, they want to make friends.”

“I actually think Time’s Up is a very good name. It’s sort of saying, ‘I know we used to do it this way, but from now on we’re not.’”
Tina Fey

“Mean Girls” coincides with a time of seismic changes in Hollywood, as the industry starts to realize the need for more stories about women. “I think it’s long overdue,” says Fey, who hopes we are at a tipping point. “I’d like to believe from here on out, this gives people a point of reference. I actually think Time’s Up is a very good name. It’s sort of saying, ‘I know we used to do it this way, but from now on we’re not.’”

Fey, who executive produces Netflix’s“Unbreakable Kimmy Schmidt,” has noticed some changes already. She was recently on a call where an actress developing a series asked for a female showrunner, and the network supported the idea. “I feel genuinely excited for women I don’t even particularly know well,” she says. She mentions “Today” promoting Hoda Kotb to replace Matt Lauer as co-anchor. “I really like her on TV. I was like, ‘Yeah, give Hoda that job!’ I remember thinking, I bet if five years ago, someone had said in a meeting, ‘What if the two women do it?’ they would have said, ‘That would never work.’ There’s a lot of imaginary rules in show business.”

One of Fey’s missions as a creator has been to hire people from diverse backgrounds. “I think in comedy rooms, especially, women are treated like expensive cappuccino machines,” she says. “Where it’s like, ‘We have one. Why would we have two?!’ That’s too much pressure on that one person — to carry that, to be the African-American writer, the female writer. It’s always about changing the chemistry of the room. The more diverse the room is, it automatically becomes better.”

But it wouldn’t be her style not to crack a joke about #MeToo while still championing the movement. “My comedy bit that I keep doing in the office is just that I’m curious about what the future is going to be,” Fey says. “Because I feel the only reason any man gets good at anything is to try to get laid. Ladies better start studying bridge architecture and space travel. I would say it’s going to be great for the STEM program, because men are just going to give up because they can’t grab butts anymore.”

“Mean Girls” was the product of a different time in Hollywood, when studios still believed in mid-budget comedies. As the head writer on “SNL,” Fey adapted the story from the nonfiction book “Queen Bees and Wannabes,” by Rosalind Wiseman, about how high school girls mistreat each other. “I promised her that I would honor the source material and it would have a positive message,” Fey says. She wrote chunks during a long summer on Fire Island, where she quizzed teenagers on the beach about their experiences. “There were 10 drafts over the course of 18 months.”

The original script was different. It was going to star Fey as a teacher, like the one in “Stand and Deliver,” on a personal mission to reform her students. “With every draft, the girls became more interesting,” Fey says. “The first draft would have been rated R. Even in the PG-13 movie, we had to take a lot of things out. We had a tough time with the MPAA. I remember thinking, If this was a movie about a boys’ school, ‘Is your cherry popped?’ wouldn’t have to come out.” The line was replaced in ADR by the much tamer “Is your muffin buttered?”

Fey flew to Toronto to film her scenes as the math teacher Ms. Norbury. “I think it was the first movie set Lindsay was on without her parents,” Fey says. “She was 17, and her guardian was also her assistant, who was a sweet girl who was 22, from her hometown.” For McAdams’ character, Fey recalls wondering if she needed to go bigger. “And then seeing it: Oh, no. I’m an idiot. That’s film acting. I think the fact that she was a truly skilled actor is what made it not drift into camp.”

On opening weekend, Fey and her husband sneaked into multiplexes all over Manhattan to catch a glimpse of people watching the movie. Fey hasn’t spoken to Lohan in a few years. The actress, who now lives in Dubai, recently said that she had written a treatment for a reunion movie. “God bless,” Fey says with deadpan delivery. “Send it in. Anyone who actually sits down and types, I’m like, ‘Great.’”

For a long time, Fey resisted requests to write a second movie, because it ran counter to her instincts. “I was like, ‘No sequel,’” she says. “In hindsight, I’m like, ‘Why didn’t we just do it?’ But maybe it’s better, because we can save all the energy for this.”