Tony Awards: Everything You Didn’t See on TV 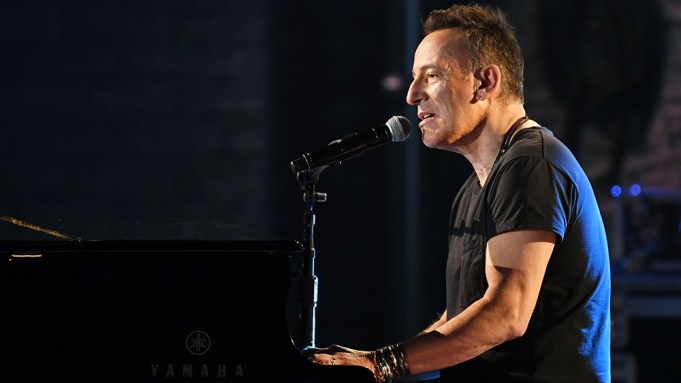 When it comes to award shows, the viewers at home often get the best seats in the house: Their sofas, where presumably no one is as hot or as hungry as the folks in black tie packed into the auditorium. But TV never quite gets the full story — there’s a lot of action offscreen, happening during commercial breaks and at the afterparties. Here are the secrets from the 2018 Tony Awards, inside the room where it happened.

1. He said “F— Trump”
When Robert De Niro introduced Bruce Springsteen’s performance on the Tony telecast, CBS bleeped out a big enough chunk of his speech that cellphones at Radio City Music Hall lit up with texts from friends at home wondering what he said. It was, for the record, “F— Trump. It’s no longer ‘Down with Trump.’ It’s f— Trump.”

2. An emotional pre-show
On TV, the Tony ceremony starts at 8 p.m., but by that point, the show has already been going for an hour. “Jesus Christ Superstar” breakout Brandon Victor Dixon and original “Hairspray” star Marissa Jaret Winokur handed out a series of pre-show trophies in the evening’s less starry categories. One moment in particular packed an emotional wallop: During his acceptance of the Isabelle Stevenson Award Tony Award for contributions to charitable causes, Nick Scandalios, the longtime Broadway exec, made a moving speech in honor of his late husband, who died in an accident last year, and celebrating his two children — “my superheroes” — who were there in the audience, attending their first Tony ceremony. There wasn’t a dry eye in the house.

3. BRUUUUUUUUCE
Springsteen appeared twice on the telecast — once to receive his lifetime honor, and then, later in the evening to perform. Every time, the very formally dressed audience whooped, “Bruuuuuuuce!” Which, it should be said, baffled some of the Brits in the house, at least one of whom misheard and leaned over to a seatmate to inquire why the audience had boo’ed the Boss.

4. The cheer barometer
There were a number of surprise wins during the ceremony — and in the room, the cheers received by each nominee’s name offered a split-second preview of what was to come. For featured actress in a play, Noma Dumezweni (“Harry Potter”) got a noisy response, as did Denise Gough (“Angels in America”), the closest thing to a frontrunner in that category. But then Laurie Metcalf — whom very few people had expected to win that night, despite stellar work in “Three Tall Women — was announced, and the room went wild. She won seconds later, suggesting a groundswell of support had lifted her above her biggest competition, Gough and Dumezweni. Something similar happened with “Once On This Island”: Few in the industry thought it would win best musical revival, but the shouts and enthusiasm in the room told a different story.

5. The exodus before the night’s biggest moment
Usually the announcement of the winner for best new musical is the evening’s tensest moment. But not this year: During the commercial break before that last award, there was a something of an exodus by audience members, worn out by the three-hour telecast (plus the hourlong pre-show) and ready to head home, or at least to grab a bite at the afterparty. They all figured they could afford to leave early: The 10-Tony sweep for “The Band’s Visit” may have been unexpected, but its win for best musical had always seemed assured, and the show’s sweep during the ceremony just confirmed it.

6. The after-party
Tony night doesn’t end at 11 o’clock. First stop: The official Tony Awards after-party, a swank affair at the Plaza Hotel.  Everyone stops in there to make an appearance — early in the evening you could have come across everyone from Zachary Quinto to “SpongeBob SquarePants” director Tina Landau — and makes a pass through the food hall downstairs. There, Broadway regulars climbed all over themselves to get to the lobster rolls as fans in the crowd posed for selfies with the night’s co-host, Josh Groban.

7. The after-after-parties
That night, there’s more than just the official party. Almost every individual show hosts its own event at venues around the city. At the Bryant Park Grill, the shindig for this year’s surprise sweeper, “The Band’s Visit,” was a predictably raucous affair. The invitation said it went from 11 p.m. ’til 1 a.m., but an hour after that, the celebration was still kicking, as well-wishers packed the venue’s patio long after the buffet had been cleared. Inside, the hopping dance party — with beats infused with Middle Eastern inflections, just like the show’s Tony-winning score —  was briefly interrupted by lead producer Orin Wolf, who told the cast, crew and assembled revelers, “This show is about you and me. This award is about you and me.” Meanwhile, a few blocks further downtown, “Harry Potter and the Cursed Child” has its own affair where producer Sonia Friedman greeted well-wishers, and winning director John Tiffany got a giant hug from one of his show’s nominees, Dumezweni.

8. Everybody’s last stop: The Carlyle
The 10-year-old party thrown by Broadway publicity firm DKC/O&M has become the night’s hottest late-night bash. This year, you could spot Gough chatting with Sonja Morgan of “Real Housewives of New York City,” or catch Kenneth Lonergan making small talk, before heading into the room playfully dubbed the Disco Lloyd Webber, where one of the night’s lifetime achievement honorees, mega-composer Andrew Lloyd Webber, manned the turntables. A highlight of his set: the Brian Hyland song “Itsy Bitsy Teenie Weenie Yellow Polka Dot Bikini,” as Lloyd Webber mouthed along to all the lyrics, pointing to people in the room when he got to the word “bikini.” But if you showed up at 3, you missed all that, although you got a glimpse of hopeful Broadway ensemble members standing at the door hoping to wrangle entry, and inside you could finish out the night with a starry crowd of nominees and winners that included Andrew Garfield, Lee Pace (both in “Angels”), Taylor Louderman (“Mean Girls”), Ethan Slater (“SpongeBob SquarePants”), Lauren Ridloff (“Children of a Lesser God”), Harry Hadden-Paton (“My Fair Lady”) and producer Jordan Roth (“Angels”).