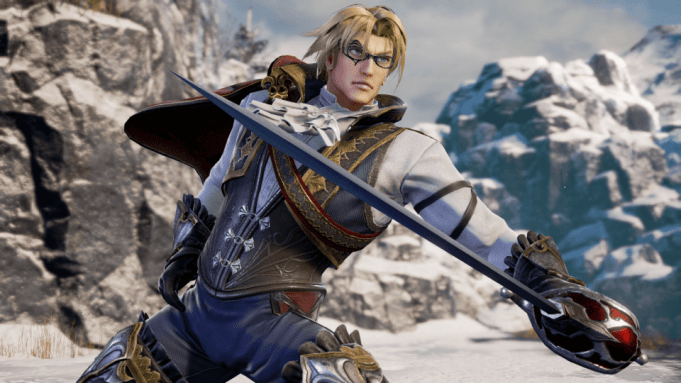 For every entry in the weapons-based fighting game franchise “SoulCalibur,” it’s worth asking if we actually need another sequel when the debut game is still eminently playable and near perfect at what it set out to do. “SoulCalibur VI” invites these comparisons more than most as it retells the story of the Dreamcast original (inasmuch as a fighting game story is of any consequence).

While the first “SoulCalibur” may have kept a laser focus on its core conceit, it was also quite limited in scope–a straightforward port of an arcade game. “SoulCalibur VI” is positively expansive by comparison, featuring a wealth of modes to keep casual players as engaged as those who want to dive deep into the competitive nuances of combat. At times “SoulCalibur VI’s” ambition seems to outpace its own reach, but the core fighting system is still here (with a couple splendid new tricks) and there’s enough quality in the surrounding material to make this journey worth retaking.

Whether you’re a fighting game scenester or just an occasional dabbler, basic 1v1 battles are the heart of “SoulCalibur.” In “VI”, they’re fast and flashy, but not so much that it’s hard to keep up (“DragonBall FighterZ” this is not). The unique weapons for each fighter easily distinguish them from one another, though some character’s attacks, like Ivy’s transforming whip/sword, are much more difficult to master. New face Grøh might be the best introductory character on the roster, boasting simple, middle-of-the-pack stats, but with a stance change option for those that want to fully explore his moveset. Online battles are perfectly functional, at least in prerelease form, though the lobby interface is barebones, and the absence of 8v8 random team battle in any mode is once again a crying shame.

“SoulCalbur VI” is an exceedingly approachable fighting game – part of what made this series a hit to begin with. Combat still foregoes the complex button inputs of something like “Street Fighter,” instead consolidating attacks to three buttons that can be pressed individually, with directional input, or in combination with one another for more dramatic results. It’s a game that you can button-mash your way around the arena and still have a great time.

“SoulCalibur VI’s” most prominent contribution to the otherwise tried and true fighting is the Reversal Edge move, mapped by default to one of the shoulder buttons. This move acts as a kind of block in its wind-up, but on impact, everything goes into slow motion as what is essentially a rock, paper, scissors match commences. Each fighter preloads their attack from the three face button options, the outcome plays out, and the battle resumes at normal speed. For less experienced players who might struggle with defending against a quick high-low barrage, Reversal Edges are nice little resets where the mind games are granted a bit more room to breathe and the playing field is leveled for a brief moment.

There are two single-player story modes in “SoulCalibur VI”, the most traditional of which is Soul Chronicle, which retells the story of overcoming Nightmare, the wielder of the demonic Soul Edge blade back on the Dreamcast game. You can play through most all the character’s relevant segments from this general timeline, each lasting a handful of fights before settling into some often low-stakes plot resolution. Geralt, the protagonist from the Witcher games, is “SoulCalibur VI’s” sole guest character, and in his Chronicle story he goes through a portal to SoulCaliburLand and immediately decides he wants to return home. It’s silly, but also reflects back on how the cut and dry good versus evil story of “SoulCalibur” is told here in a level of verbose detail designed to send wiki editors into a tizzy. That is to say, Geralt is definitely the sort of person who would button through all this dialogue as fast as possible, so he can get back to business, and who could blame him?

It’s the other story mode, Libra of Soul, that has the real legs of the package. You create a new character (confoundingly, you can’t import ones made outside of Libra) and move a cursor along a path on a world map to trigger story moments and fights. There is a role-playing layer to the endeavor where you level up your fighter and earn currency to buy and upgrade weapons and purchase consumable items that provide stat boosts in encounters. “Libra” is in reference to a set of scales that monitor your moral choices (i.e. kill or spare your possessed friend), but the consequences of these moral shifts is mostly only reflected in some weapons that add buffs one way or the other. The story itself is even drier than Soul Chronicle, delivered via text windows and small character portraits. On the positive side, the fighting in Libra is reenergized with specific parameters and restrictions that add unique challenge. The slippery surfaces modifier is particularly fun, making fights less about pummeling your opponent than tricking them into accidentally run off the edge of the arena. It’s in these moments where “SoulCalibur VI” reignites that goofy charm that represents the franchise at its best.

Speaking of goofy charm, ever since “SoulCalibur III” introduced a character creator, the series has been as much a polygonal dress-up doll workshop as it is a fighting game. For better or worse, not much has changed from “SoulCalibur V”s” character creator, so you can expect plenty of fighters that look like they’re wearing knockoff Halloween costumes of unlicensed properties. You can also modify outfits for fighters from the proper roster too, should you want some alternatives to the strikingly lascivious defaults. The creator mode allows for some pretty wild results thanks to the ability to attach up to three supplemental shapes (a cube, spikes, a heart, etc.) anywhere on a character and texture them to your liking. As wacky as that is, the clothing options still feel lacking. With all of the allowances for portals and anachronisms elsewhere, there really should be more modern fashion options to choose from. If you dig into the full slate of customization tools you can make up the difference, but the simple inclusion of, say, a baseball cap would go a long way.

In many ways “SoulCalibur VI” is the same old “SoulCalibur.” Nothing will replace the original, but “VI” iterates on the combat formula in smart ways and Libra of Soul adds hours of unique challenges, even if the storytelling wears a little thin. “SoulCalibur VI” doesn’t seize the crown from its forbearer, but it does build an entire city around the throne.