'Shadow of the Tomb Raider’s' satisfying gameplay is at odds with its story. 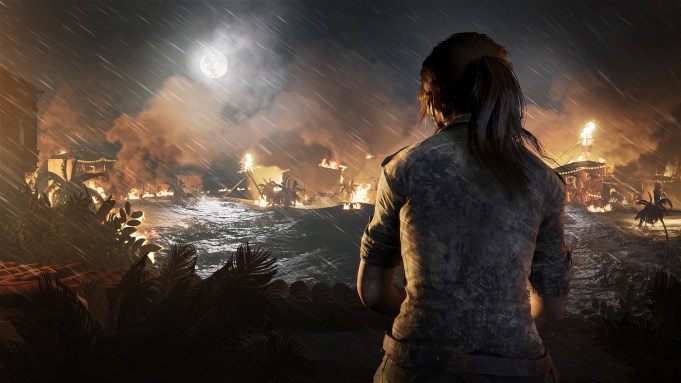 Destruction follows Lara Croft in “Shadow of the Tomb Raider.” Still looking for answers about her father’s death, Croft and Jonah Maiava—a character introduced in “Tomb Raider” that Croft now calls her best friend—set out to South America chasing a new clue. A year out from “Rise of the Tomb Raider” and even longer from “Tomb Raider,” Croft’s changed: She no longer fears her enemies. Instead, they quiver as they’re being hunted by her.

Croft is hyper-focused on answers, whether it be her father’s death or what Trinity, the group of world-cleansing bad guys seen before in the series, seeks. Her search for answers leads her to an artifact, a dagger, that acts as a key—paired with a silver box she’s not yet found—to set off an apocalypse. She snaps up the dagger, not knowing that she’s set off a series of natural disasters she set out to stop. It’s a moment that’s at the heart of “Shadow of the Tomb Raider’s” story, a question that doesn’t have an answer: What are Croft’s actions truly accomplishing?

It’s a spark of a moment that suggests Croft will contend with the consequences of her actions as a wealthy white woman from Great Britain. The cultures she’s digging through are not her own. It’s not something she’s had to consider before, not until the consequences are right up in her face, in the form of Dr. Dominquéz, an important Trinity figure and the antagonist of “Shadow of the Tomb Raider.” Croft doesn’t believe him when he says that without the silver box, she’s set the world up to end. But then the destruction hits: a tsunami, a storm, and an earthquake, all of which will lead into an eclipse that blocks out the sun. A new beginning, one that leaves much of the world’s inhabitants dead.

“Shadow of the Tomb Raider’s” main storyline stays relatively consistent in Croft’s near-obsessive search to fix the world’s she’s now broken. Throughout the main story, her goal is clear: get to the box before Dominquéz — who ends up having deep ties to Paititi — does, and hand it over to Paititi’s rightful queen, Unuratu. But it’s the sidelines of the story, the flavor mixed into “Shadow of the Tomb Raider’s” rich world, that break off and create the confusing divide, despite being the most gratifying parts of the game. Croft rummages through the game’s main hub of Paititi, a secluded and secret civilization in the Peruvian jungle, to collect supplies, hunt for artifacts, and mine for jade. She knocks over pots and animal hides before diving into underwater tombs to scrounge for new gear, often found in ancient crypts. Given that these actions exactly are what set off the cataclysm that she’s now up against, it feels at odds with the game’s underlying theme.

These parts of “Shadow of the Tomb Raider” are where the game truly shines, though. Paititi is a living, breathing world with lots to do and plenty to collect, nearly three times the size of “Rise of the Tomb Raider”’s main world. There are hours upon hours of things to do and places to explore in the hidden city, which Eidos Montréal clearly took care to build out. Exploring encourages even more exploration, with each bit unlocking the city’s secrets. Challenge tombs offer improved, dazzling puzzles that are satisfying to solve and use many of Croft’s new abilities that allow her to rappel down cliffs and wall-run. “Shadow of the Tomb Raider’s” skill system is also designed to help out, with three areas available for upgrades: seeker, warrior, and scavenger. Seeker skills help Croft work through her environment, whether it be through increasing resources or softening her steps. Naturally, warrior skills give Croft a boost in combat. Options are available for those that need “visual assistance” in aiming or reducing damage from enemies after landing a stealth kill. Scavenger skills improve Croft’s stealth abilities, one of which lets her douse herself in mud to blend into walls.

Those Scavenger skills are a way to enhance the game’s already great stealth mechanics, a true highlight of the game. Unlike in previous games, Croft is able to fall in and out of stealth; so if you’re spotted by an enemy, you can re-group and slip back into stealth — with a little skill. The game, perhaps not entirely intentionally, encourages a stealth approach to its gameplay. Aside from Croft’s signature bow, shooting doesn’t feel natural. Weapons, even with upgrades and warrior skill assists, feel unwieldy. It’s not just that it’s hard, it’s that it’s frustrating, whereas taking down a massive group of enemies using a purely stealth approach is just as hard, but a rewarding challenge.

Eidos Montréal included extensive difficulty settings for players to build out their own options based on skill level as well. Exploration, puzzles, and combat difficulty are all available to adjust separately, depending on style of play. Puzzle experts can boost difficulty there without making combat a nightmare, and vice versa. But regardless of the difficulty setting, “Shadow of the Tomb Raider” makes it clear that Croft is the predator. She’s the shadowy hunter, and the world is her prey.

It’s unfortunate that the developers didn’t spend as much time tuning the game’s story and how Croft fits into it as they did in building out her world and making sure the game found its balance between rewarding challenge and off-putting difficulty.

“Shadow of the Tomb Raider” delivers stunning cinematics, evolved gameplay and a deep explorable world, but its narrative and portrayal of Lara Croft is ultimately at odds with the Croft that Eidos Montréal hinted at throughout the game, one that’s supposed to have found nuance in her place in the world.