Continue to Variety SKIP AD
You will be redirected back to your article in seconds
Nov 12, 2018 6:00am PT 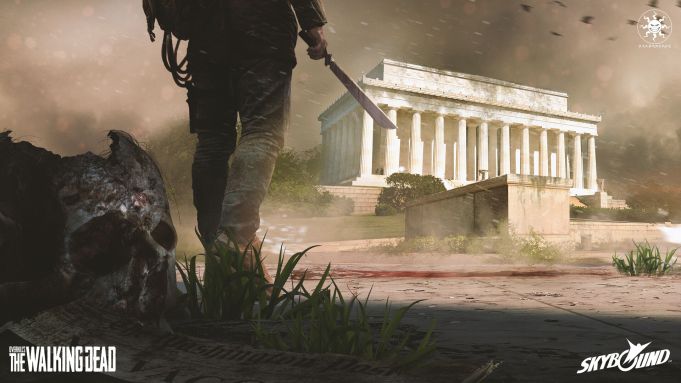 Much like the mindless hordes it sics on you over and over, “Overkill’s The Walking Dead” is defined by repetition. It sends waves of the same zombies, the same puzzles, even the same levels after you over and over, and expects that its players share an unceasing, undiscerning hunger for “progress” — resources and better gear. This isn’t necessarily an unfair assumption — players love loot — but “Overkill’s The Walking Dead” leans too heavily on the prospect of a new gun or climbing a skill tree to sustain and satisfy on its own, while failing to connect that progression to its gameplay in a meaningful way.

Let’s get this out of the way: Though it shares a name with the popular TV show and comic books, “Overkill’s The Walking Dead” only offers the most superficial connection to the “Walking Dead” universe. Cobbling together a facsimile of the plot found in many of the series’ stories, the four player characters defend their post-apocalypse survivor camp in Washington D.C. as it is caught up in a conflict with a bigger, more belligerent group of survivors called “the family.” Though Overkill said the series takes place in the same world as the comic books and now-defunct developer Telltale’s adventure games — the shows and upcoming movies are their own thing — you’ll be hard-pressed to find a concrete connection.

Despite the lack of fan service, though, the spirit of “The Walking Dead” is present here. Overkill’s version of “The Walking Dead” blends elements of its 2013 hit “Payday 2” with the gear-driven gameplay of progression-fueled shooters like “Destiny 2” and, most directly, “Warhammer: Vermintide 2” to create a zombieland loot runner. Teams of up to four players push on linear paths through undead-infested streets, scouring every drawer and cabinet for items and gear on the way to a bigger objective, often to steal some equipment or supplies from hostile survivors.

Teams are forced to choose between short- and long-term survival tactics at every turn, which makes for interesting and intense situations. Firing guns, triggering car alarms, or making noise in any way attracts the attention of the “walkers” (That’s “Walking Dead” for zombies). Make enough noise to fill the zombie meter at the top of the screen, and groups of undead start to steadily converge on your position, injecting urgency and tension into every sequence. Your human opponents won’t hesitate to fire their guns, forcing you to choose between dealing with hordes of zombies that can number in dozens, or literally bringing a knife to a gun fight.

Like “Payday,” every mission requires teamwork, timing, and good communication to pull off. Puzzles force teams to split up to find items or solve puzzles, and zombies consistently on your heels, the difference between success and failure can come down to efficiency and chemistry. Likewise, healing items don’t come in great supply, but enemies do. It’s important to deal with even small combat scenarios as a group to preserve health. Things can spin out of control fast, but that only makes it more satisfying to successfully pull off a run as a team.

Unfortunately, “Overkill’s The Walking Dead“ cuts off its best gameplay at the knees by not featuring in-game voice chat. While It’s easy enough to set up a call with friends through Steam VoIP, Discord or Skype, the added steps make it unlikely that you’ll set up chat with players you meet through the game. You can get by with text chat if you have to, but failing to integrate some kind of chat into the game feels like a cardinal sin.

Even if you set up chat, though, those interesting elements of “Overkill’s The Walking Dead” are weighed down by a repetitious structure and RPG elements that fail to enhance it. Each player equips a melee weapon and two guns, which can be modified with silencers, sights, and other accessories that boost your character’s equipment score. While making that number go higher implies progress, using better gear feels mostly meaningless in the moment. You will spend the majority of your time pummeling or slicing through zombie crowds, where the weapon with timing and range that you understand beats higher level gear every time.

Likewise, Each of the four characters represents a class, each with their own abilities and weapon specializations. While some of the abilities can make a huge difference in the right situation, they come into play infrequently and do little to make each character stand out.

In between missions, there are a pack of systems to upgrade and resources to manage. Each success earns you supplies, which help to feed the other members of your camp who, in turn, can bring you additional resources and provide bonuses for future runs. You can also use those supplies to upgrade the camp, which unlocks access to more levels and abilities.

Managing the camp is technically necessary, but feels like mindless busywork. Though you visit your camp between missions, you never develop any strong connection to the members of your team or the camp’s leaders, because the dialogue among them is restricted to cliché one-liners. Without a connection to the camp, you don’t care if they live or die, which makes micromanaging the game’s extraneous measurements for progress feel pointless.

In fact, the whole cycle that defines “Overkill’s The Walking Dead” feels hollow. The story is an excuse to put players on missions, but who cares about the mission if you don’t care about your camp? The goal of the level is to bring back supplies and loot that upgrade your character, but why bother upgrading your character if it doesn’t make the game more exciting? The best loot-driven games rely on a great progression to spur you on, to get you so excited that you don’t mind replaying the same old levels. “Overkill’s The Walking Dead” seems to expect that, once you’ve started playing and leveling up a character, you simply won’t be able to stop. There are plenty of games, even time sinks, that will treat you better.