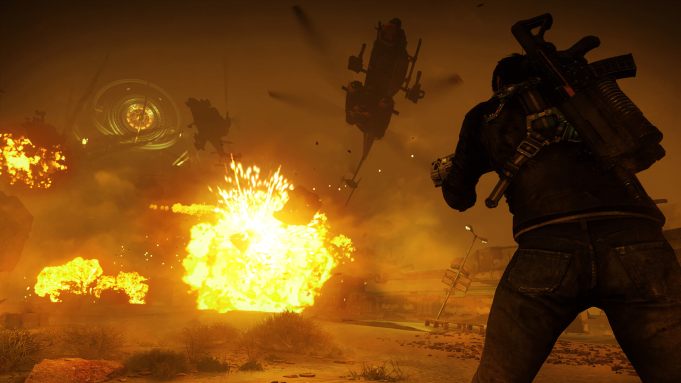 “Just Cause 4” is meant to be taken in at 50,000 feet. The fourth iteration of the zany, explosion-happy sandbox series looks and feels very appealing when you’re soaring over the jungle, blowing up wave after waves of enemy troops from a helicopter. When you take a closer look at what you actually do minute to minute, hour to hour; you can see that the package is far less inviting than it may seem, even for a game named to evoke a carefree shrug.

Though it is the fourth game in the series, “Just Cause 4” feels more like the second part of a series that began in “Just Cause 3.” Upon learning that his father once worked with his longstanding enemy, a mercenary militia called The Black Hand, series hero Rico Rodriguez heads to the fictional island nation of Solis. His goal: Destroy The Black Hand, whose leader is also the local dictator, and dismantle the doomsday weapon his father helped build — a weather machine called “Project Illapa” that triggers blizzards, tornadoes, and lightning storms at will.

The story’s primary components — a personal vendetta, gratuitous explosions, a weather machine — have all the makings of a classically trashy action movie sequel. It sounds like a perfect fit for the franchise’s B-movie oeuvre, but “Just Cause 4” falls into the trap as the movies that inspired it: It lingers on its characters longer than they can support. Rico Rodriguez is an avatar for badass behavior: He’s never needed an emotionally weighted reason to unleash wanton destruction before, so it rings hollow now.

You can, of course, always skip the cutscenes and jump right into the action. Like its predecessors, “Just Cause 4” is structured to give you excuses to blow stuff up. Solis is broken up into more than 30 regions, which Rodriguez must wrest from The Black Hand by creating enough mayhem to fan the flames of revolution in Solis and draw people to his “army of chaos.” What kind of mayhem?  Running over enemy soldiers, crashing a jet into an oil tank, tethering a tank to a zeppelin — You know, the usual.

This is the heart of the Just Cause experience, and it remains compelling in “Just Cause 4.” There is a childish joy to gain from blowing a row of fuel tanks sky high, even if you’ve done it 100 times before. Likewise, floating high over the jungle or desert using your parachute or wingsuit often delivers some nice, scenic views. You can always find a new way to make things interesting in the moment, especially if you want to get creative. And as long as you go fast or something breaks, you generally get credit for it.

“Just Cause 4”’s biggest mechanical advancement stems from a range of customizable options for Rico’s signature grappling hook/tether-gun. In addition to linking things together or pulling yourself, the tether can now hook items up to hot air balloon, pull one object toward another. The ends of a detached tether also have booster rockets that send objects flying. Each of these abilities can be customized in multiple ways to allow for all kinds of creative demolition and self-motivated fun. For example, you can set your balloons to different heights, which could allow you to create a series of floating tether points. (You can also fill the balloons with explosive gas, to make sure they fall back to Earth in flames).

Sadly, “Just Cause 4” rarely takes advantage of these strengths within the confines of its own story mode. Its many regional takeover and story missions almost always offer the opportunity for madness, but focus on far more directed tasks. In fact, many missions demand restraint: Multiple missions require you to escort AI-controlled allies from point A to point B, another set requires you to find a safely drive vehicle to a scanner, which unlocks access to a generator to blow up or a terminal to hack. Forgetting about the fact that these missions offer uniformly boiler-plate open-world fare, the vast majority fail to embrace or encourage the “Jackass”-style insanity baked into the game’s DNA.

Escort missions where you have to drive cars instead of tether-launching them into the jungle would, perhaps, feel less damning if the game weren’t so repetitive. The vast majority of missions repeat at least three times, often more, with only the slightest variations. You can, of course, make these missions as wild and crazy as you want if you take it upon yourself to make things more interesting, but flights of fancy often get in the way, as the missions do not necessarily mesh well Rodriguez’s destructive skillset.

There are a handful of breaks in the repetition, which come from the cornerstone missions where Rico destroys the “weather cores” that control Project Illapa. Each mission prominently features a certain type of weather — lightning storm, tornado, sandstorm, blizzard — which force you to change how you play to mitigate the conditions they bring to the table. In the lightning storm, you have to use your grappling hook every few seconds to avoid getting hit by lightning. In the presence of a tornado using your parachute is instant death, which makes it harder to make precise landings. These missions ultimately don’t vary much from their more mundane counterparts, but chasing a skyscraper-sized tornado in a wingsuit plays just as crazy as it sounds, and in the moment that’s enough.

Unfortunately, those crazy weather missions are few and far between. It’s far more common to stare at a mission area and wonder, “is there any way for me to make this more interesting?” Even among games that would deign to call themselves “destructive sandboxes,” few games let you break and blow stuff up like Just Cause, but “Just Cause 4” doesn’t go there unless you force it to.