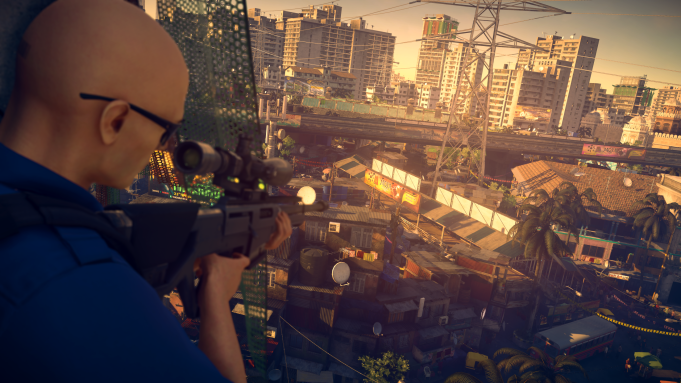 That we’re even getting another Hitman game feels like something of a miracle. After developer IO Interactive was cut loose by Japanese publisher Square-Enix in 2017, it was unclear who would retain the rights to develop Hitman games, and whether they would continue at all. But in a remarkable display of good will and good faith to IO and fans of the franchise, Square-Enix gave IO the Hitman IP to do with what they could.

Surprisingly, IO found a new publisher in Warner Bros.’ Games, and slightly more than a year later, despite the odds, “Hitman 2” is here, and absent some of the unfortunate compromises that made 2016’s Hitman such an uneven journey of a game.

“Hitman 2” is labeled as a sequel, but more than any previous game in the franchise, it explicitly continues the story that ended on a cliffhanger in “Hitman 2016.” The bald super-assassin Agent 47 is still sniffing out the identity of a secret society seeking to destabilize the world to their own financial benefit while learning more secrets than he bargained for in the process. However, unlike “Hitman 2016,” “Hitman 2” is a complete package from the start.

“Hitman 2’s” opening practically bludgeons one with technical improvements over the last game. The improvements to lighting and character detail, as well as the world around 47 is impossible to miss, particularly playing in 4K on Xbox One X (though this comes with a catch: at various points with the game pre-release, the framerate in the higher resolution mode often dipped into unacceptable levels, forcing a switch to the framerate priority mode, which provided a blessedly smoother experience).

Looks are nice, but “Hitman 2’s” entire package feels better-assembled top to bottom. The slow menus and ridiculous load times of “Hitman 2016” are generally gone, and the bugs that plagued it don’t seem present here. “Hitman 2” also refines “Hitman 2016’s” already-considerable series improvements in controls and world interaction. More than ever, what a human being in a real world brainstormed as a potential solution to the problems in front of them are generally achievable in “Hitman 2’s” world.

Player’s don’t need to carry coins with them into missions — if you want to distract an enemy, there is always an object around to pick up and throw to grab some attention. Physical traversal also seems to have fractionally less friction and/or delay than its most immediate predecessor, making moving around, aiming and shooting easier. More plainly, it feels easier to play than the series ever has.

There are more discrete additions. IO Interactive has brought back the ability to bring a briefcase into levels, assuming you select it in your loadouts, allowing 47 to bring in larger tools like a sniper rifle or other long gun, should firearms be your tool of choice. New to the series is, strangely enough, something seemingly lifted straight from recent Assassin’s Creed games — the ability to hide in tall grass and bushes when crouched and to hide in plain sight automatically by walking up to crowds of people.

This is a valuable addition in large part because there are a lot of people in “Hitman 2’s” levels, generally speaking. There appear to be more people than any previous area in a Hitman game  — including the Mardi Gras stage in Blood Money — and commensurately, the spaces are huge to accommodate all of those bodies. Without speaking to actual square footage, every level feels bigger than anything comparable in “Hitman 2016.”

“Hitman 2’s” hugeness goes beyond raw, uncomplicated increases in level footprints. These new spaces are more complex and more full of stuff than they’ve ever been, even in comparison to “Hitman 2016.” Missions have several targets, which isn’t in and of itself new, but the interconnectedness of their patterns and behaviors lend a greater sense of relationships and believability to them, which is especially engaging. Hitman games have always given their targets stuff to do — in large part in order to provide more of the series-defining Rube-Goldberg-of-Death ways to kill them — but “Hitman 2” really ramps up the potential scenarios in which your targets might involve themselves.

It feels as if something inside Io’s design team snapped, or maybe just clicked into place. After years of subtlety, “Hitman 2” is perhaps the first time series creators Io Interactive have seemed hellbent on making sure that everyone who plays it knows that there’s a hell of a lot more going on in every level than is immediately apparent.

The heavy lifting here is done with a new systemic addition to “Hitman 2” that IO is calling Mission Stories. Hitman games have always been full of weird and interesting narrative moments, but they were often things you had to really be looking for to find. “Hitman 2” adds more of these than ever, and it more tightly ties these various narrative queues into the various strategies you can use to take out your targets beyond the classics like a fiberwire garrote or a silenced shot to the head.

Now when you see weird crap — and good lord is there a wonderful amount of weird stuff to find — it will more frequently tie into the mission. And, more than ever, “Hitman 2” is going to actively tell you that these bits of narrative can lead to mission solutions.

This may be jarring to some long-time fans initially. “Hitman 2’s” default state is to guide players through mission story queues with markers and prompts, practically spelling out some of its more complicated kills and traps. This continues a trend of accessibility the Hitman games have pursued since 2012’s “Hitman Absolution,” which added the instinct mechanic allowing 47 to see enemies and objectives through walls.

You can turn all of this off and have a dramatically more punishing experience if that’s how you want to roll. The default Mission Stories settings can feel like a case of information overload. Dialing back the information provided allows players to find mission story prompts on their own.

Even without all of the breadcrumb trail bits of user interface and hints, Mission Stories prompts players to be orders of magnitude more curious than ever required in a Hitman game. There’s always been a hint of voyeurism in the Hitman games, but there are times in “Hitman 2” where the player can feel like, well, kind of a stalker. Mission Stories add an immense amount of clearly articulated replayability and incentivized discovery to “Hitman 2,” even more so than the challenges introduced in “Hitman 2016,” and making the right connections and seeing things to completion was intensely rewarding.

Mission Stories are often tied to specific kills that in turn lock off other Mission Stories, meaning you’ll never be able to get everything in one go; if, for example, one were to use an industrial concrete mixer to blast a target into a pit at a construction site, they wouldn’t be able to maneuver them into a compromising romantic position with another target to kill two birds with one stone — and if one killed the two of them together, they wouldn’t be able to feed one of them to their ill-advised exotic pet. And in the event that it isn’t clear that IO wants you to replay these missions to find more stuff and try more solutions, upon mission completion, after cycling through all of the challenges you missed or completed, the game actually prompts you to replay them to unravel additional Mission Stories.

This gets to one of the compromises most apparent in “Hitman 2.” While “Hitman 2016” shipped episodically, it ultimately contained eight missions: two introductory/training scenarios and six proper levels. “Hitman 2,” on the other hand, features an introductory level that, while gorgeous, is very small, and five proper locations. It doesn’t quite feel fair to say it’s light on content — “Hitman 2’s” levels are gigantic, and they’re full of things to see in a way that is significantly more incentivized than ever before. These are some of the best levels the series has ever seen, integrating the smartest bits of so many of the Hitman franchise’s greatest hits, and some of the sheer bravura of its best moments. They’re the most beautiful, completely realized spaces of any Hitman game. There’s just not a lot of them.

This minimal number of missions may share a root cause with the other, bizarre element of “Hitman 2” — the cutscenes. Cutscenes in “Hitman 2016” were dramatic, well-acted and well-animated. In “Hitman 2,” these cutscenes are largely static, with unmoving figures set against slightly shifting backgrounds and voice-over accompanied by no lip-sync whatsoever. They’re stylistically consistent, but it’s such a profound, massive change for a game that so clearly wants to be treated as the second season for the first game that it can’t help but be flabbergasting.

There are of course some new co-op options that at press time, were available to test, including ghost mode, a semi-passive competitive assassination exercise that’s promising, at the very least. There’s also the co-operative Sniper Assassin mode, which, while a fun diversion, isn’t really what most play Hitman for. The bulk of “Hitman 2’s” post-release content — until the promised expansions, that is — will be the limited time elusive targets. These were frequently creative, fun additions to “Hitman 2016,” but we’ll have to see how things shake out when the first one hits “Hitman 2” in a couple of weeks.

If the package of “Hitman 2” was all there was, it would be easy to recommend, albeit with those qualifications, but there’s more going on here. In a particularly fan-friendly move, and a business savvy one, IO has gone back to “Hitman 2016” and brought the whole game into “Hitman 2,” including its bonus missions and expansion campaign, as an in-game purchase.

These missions have received visual upgrades based on engine improvements to “Hitman 2,” as well as new mechanics like the briefcase. And in perhaps the most drastic addition to these missions, all of this returning content has been fully retrofitted with the Mission Story system. Even for players who have completed the 2016 release, there’s now a reason to go back through and try again. And in the most consumer-friendly move from a game studio in 2018, if you own “Hitman 2016” and its DLC, all of this practically remastered, updated content is completely free, and completely integrated within “Hitman 2.”

It’s a cliche to say one game or another is a love letter to … whatever. But after a period of time where the future of the Hitman series seemed uncertain, where its most recent predecessor felt compromised and broken apart due to the dire financial realities and constraints of the modern games industry, “Hitman 2” is hard to read as anything other than a fierce love letter to fans of the series. It’s not a perfect relationship — none ever will be. But at its heart, “Hitman 2” succeeds at being the most well-realized articulation of all of the things that the series has ever done well.