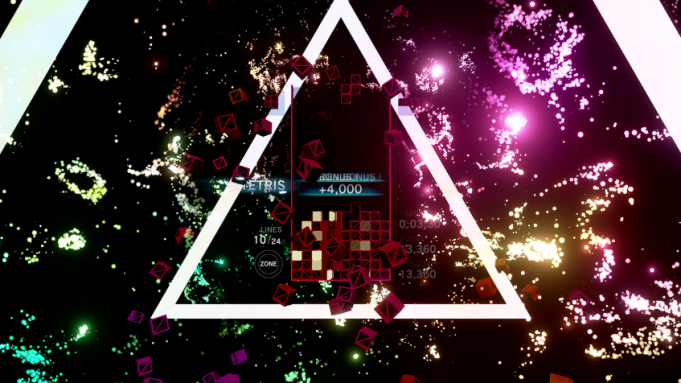 You’re hurtling through space as rainbow-tinged sparks fly through the air, coupled with twinkling stars and ancient artwork. You’re on the edge of infinity, caught somewhere between exuberance and thoughtful meditation as you immerse yourself in one of the most beautiful games of “Tetris” you’ve ever played.

“Tetris Effect” brings the addictive puzzle action of “Tetris” to PlayStation 4 with optional PlayStation VR support. This mesmerizing take on the original game takes the familiar concept of fitting various block shapes together neatly and breathes new life into them as “Tetris Effect” transcends simple reboot territory and transforms into nearly a new game entirely.

Every manipulation of each tetrimino results in a small addition to the music as your controller pulses along to the beat, with rainbow sparkles flooding the blocks below you in an array of shapes that aren’t unlike sugary sprinkles on sour candies.

While completing each stage in “Tetris Effect,” there’s a sense of wonderment and calm that washes over you – suddenly it’s as if you aren’t playing “Tetris” or even a puzzle game, but attempting to solve the mysteries of the universe. Coupled with the sense of intimacy that playing in VR lends to the experience, you’re lost in your own little world, frantically fitting together puzzle pieces in a mad dash to reach a respectable score. This is “Tetris,” reborn, reinvented, and reinvigorated – the best the game has ever been.

Those familiar with Enhance, Inc. CEO Tetsuya Mizuguchi’s previous works like “Rez” and “Child of Eden” will immediately recognize his fingerprints all over the lush visuals and lavish soundscapes, as many of the stages bring the recent VR-enhanced “Rez Infinite” to mind, from the impressive particle effects to the archaic “invention” scribbles and ethereal sea life found in several stages.

There are several modes through which to take it all in. Journey Mode is the game’s “campaign” mode,” with three difficulties: Beginner, Normal, and Expert. From a stunning branching path that resembles celestial peacock feathers, you’ll automatically enter each new level or point your glowing cursor toward each stage manually when returning to the game. This is where you’ll want to begin, both in terms of unlocking additional content and because each area is such an impressive spectacle.

Each stage puts a classic game of “Tetris” front and center, with stunning visuals surrounding it – both to accompany you and distract you, it seems. As the blocks fall into place, it’s your job to fit them together and clear as many horizontal lines as possible. The stages have set amounts of lines that need to be cleared, and when you hit that threshold, they’ll melt straight into the next area, with the blocks that you didn’t clear left over from the previous stage (going in fresh if you can’t clear them is a good idea here.) It can be extremely difficult to properly arrange the falling shapes as the speed ramps up to 10, then 15, and even faster from there, but luckily you have a special weapon at your disposal: the “Zone” power.

The Zone effect will slow time for a short period, letting you piece together and complete lines to buy you time and clear out the burgeoning board before it reaches the top and you have to start all over. Lines completed with Zone active do not count toward each stage’s goal, but do go a long way toward combo bonuses, raising your score and level rank, and letting you pull off massive line-clearing combos, which are some of the most fun things to do in each stage – it feels like a hard-fought victory any time you clear four or more lines at the same time. It’s a small alteration to the formula, but a fantastic one.

As far as visuals and music go, “Tetris Effect” kicks off with the same ephemeral sweetness from its launch trailer with the sea life-themed “Connected (Yours Forever)”, featuring dazzling particle whales and fish as the stage soars and transforms. There’s a wide range of accompanying visuals with unique coloring, effects, and themes. A jazzy urban level punctuated by the sights and sounds of New York City is a striking change from the mystical underwater dolphin area. Fiery apparitions dot the landscape in the “Ritual Passion” level. At one point, there’s a forested area and even a stage that takes you from the desert to the moon, trading camels for spaceships. “Tetris Effect” is unafraid to take players just about everywhere throughout its more than 30 stages.

If you’d rather chill out and explore the stages without the distraction of puzzle-solving, Journey Mode also features a “Theater” option that allows you to view the striking visuals from each stage as they fade seamlessly into the next.

There are, of course, tracks that eclipse and overshadow the others, such as the beautiful “Connected (Yours Forever),” which provides a far more memorable experience than that of, say, Karma Wheel’s subdued “Pulse.” “Always Been But Never Dreamed,” which provides a swirling backdrop for the almost mystical Metamorphosis stage, is an uplifting yet ponderous EDM track that’s simultaneously hopeful and unsettling at times. Some of the tracks feel more like unfinished loops than layered compositions, but their accompanying visuals are memorable and varied, and when a stage comes together with all these individual elements, it truly dazzles.

While you can opt for playing outside of VR, immersing yourself fully is the preferable way to play – you’ll feel much more engaged and in the “zone” with the falling blocks right in front of your face. Playing on a PlayStation 4 Pro does offer crisp visuals, however, when the headset comes off. The only real frustration that comes of playing in either mode is the fact that you must zoom the camera in with the analog sticks for a closer look with every new stage, even if you’re just restarting one. When playing on higher difficulties and speed settings, this can cost you precious moves and time – there should have been a way to set the camera zoom and angle once and leave it as such for the duration of each session.

When you’ve completed the set of stages available in the gorgeous Journey Mode, the game’s multiple Effect Modes offer various ways to explore the world of “Tetris Effect” with different objectives to complete. Of course, there are the classics: Marathon, Ultra, Sprint, and Master modes, which let you challenge yourself with Tetris in traditional ways such as playing with blocks that appear instantaneously or clearing a number of lines as quickly as you can.

Beyond that, there are a number of other categories and playlists grouped under purposes like “Relax” and “Focus.” The Relax grouping is meant to help players chill out with more easygoing stages and challenges, such as Quick Play, which lets you play through any stage with no Game Overs. The Focus category features options like All Clear mode, which tasks you with earning as any All Clears as possible before time runs out.

Meanwhile, the Adventurous category features options like the Countdown, Purify, and Mystery modes, which offer unique approaches to traditional Tetris. Countdown features I-Tetriminos only, Purify asks you to clear as many “Dark Blocks” as possible in three minutes, and Mystery inflicts random status effects throughout a Marathon session. Finally, Orbit lets you explore the globe and check out the avatars of other players currently in-game as well as their levels and PSN IDs. There are 200 avatars to collect, ranging from colorful manta rays and dolphins to celestial blimps and parachutists in categories like Journey, Animal, Space, Other, and Event, which are unlocked during various events held in-game and awarded when certain milestones are met.

Each weekend, a “Weekend Ritual” event will run for 24 hours, and during that time players will be asked to spend time in a specific game in Effect Mode to earn points that add up to a Community Goal. Players will need to meet 100% of the goal during that time, to earn a special in-game avatar for everyone who participated as a reward. It’s meant to spotlight different Effect Modes and encourage players to see what else the game has to offer, which adds even more replayability to a game that’s practically built for you to play and enjoy several times over.

There’s so much to take in with “Tetris Effect” for longtime fans and newcomers alike, from its vast collection of visuals and challenging game modes. When a mind like Tetsuya Mizuguchi puts his creative weight behind a classic like “Tetris,” this is the astonishing result. For “Tetris” fans or those who simply appreciate the melding of music, visuals, and addictive gameplay, “Tetris Effect” is a masterpiece. If you’re looking for your newest puzzle fix, it’s an essential buy.