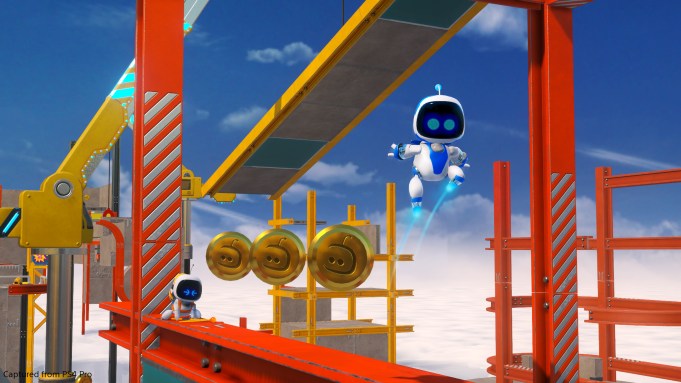 Virtual reality titles often excel at offering immersive experiences, but too often the isometric, platformer games of the medium lack a crucial element: The feeling that one is truly inside the game. With few exceptions, most of these sorts of VR games that have you controlling a tiny figure inside a game are content with giving players a front row seat as sort of powerful, omniscient spectators, but rarely as a figure in the context of the actual game.

That’s why “Astro Bot Rescue Mission” is such an interesting specimen. The diminutive bots from Sony’s “Playroom VR” Robot Rescue mission star in a family-friendly adventure where players are tasked with bringing them back home safely. Instead of jumping into the shoes of a robot, the game invites anyone to put on the PlayStation VR headset and step into the game itself, as part of the game world.

As such, the robots acknowledge you when you power up the game, headset and all. This one important detail makes all the difference, and Sony’s Japan Studio has deftly crafted a charming and engaging platformer that makes intelligent use of the virtual space.

After a brief introductory cutscene (there is no dialogue) the tiny robot peers up from the PlayStation 4 controller, represented in-game, and rockets off into the level as players set off on their all-important rescue mission. The bot isn’t that powerful on its own but has a range of abilities that can be utilized in different situations. Its normal repertoire includes a melee attack and a jetpack-like hover ability, but along the way grappling hooks and other mechanisms can be employed for context-sensitive actions.

The game features several different worlds with various themes, ranging from construction zones to caves dotted with fungi. There’s a wide variety of platforming mechanics sprinkled throughout. You’ve got tightrope walking, bouncy pads, moving platforms, elevators, sneaky enemies, and everything else you’ve seen before in the platformer playbook. But that’s hardly a bad thing, as it’s all used in such a way that the VR space enhances each setpiece beautifully.

After completing all four themed levels, a boss encounter opens up, which typically find the player entering the “arena” area and scuffling with big, epic bosses, the first of which is a cyborg gorilla whose teeth need to be pulled from its skull.

Astro Bot isn’t the only character who’s aware of players as an in-game entity, either. Octorok-like enemies spit ink at your PlayStation VR visor, while bosses’ saliva splatter all over the screen much like the Bloober power-up in “Mario Kart.” There are also several ways you interact with Astro Bot and the world beyond directly controlling it. A selection of signs that must be smashed with your head can be found dotting the levels, making sure you know to duck or move as indicated on-screen to push through them. Sometimes, the PlayStation 4 controller itself needs to be placed inside treasure chests to unlock important items, such as the grappling hook. There’s also a water cannon, a machine gun, and various other controller tools at your disposal.

The worlds are breathtaking, fully-realized areas with steep highs, gorgeous scenery, and smart level design that keeps you guessing. Unlike in traditional platforming games, players must move around, crane their heads, and look high and low in 3D space to see everything. Physically stepping forward and moving around in the real world to look past a pillar is something most gamers just aren’t used to yet, and this maneuver is used to fantastic effect in “Astro Bot.” It’s such an exhilarating and freeing feeling to know that you’re part of this adorable, cartoony world, and it’s this type of design that has you forgetting you can’t reach out and grab things right in front of you.

The Astro Bots that need rescuing must be found, too, as boss levels in each world require a certain number to have been recovered before unlocking. This means there’s a degree of backtracking required if some bots aren’t found the first time through each area. They’re hidden extremely well, with some hanging off a ledge that’s seemingly impossible to reach, and others behind players at the beginning of a level. They’re also fairly noisy, which should tip you off if you find yourself struggling, but they’re not always that simple to track down.

Unfortunately, there’s no manual camera control to alleviate some of the issues these mechanics can bring. As such, there’s a frustrating mixture of blind jumps as well as nooks and crannies that simply can’t be viewed. In these situations, players can typically rely on Astro Bot’s shadow to guide them through more difficult areas, but without any way to manipulate the camera, certain areas become slogs with frustrating level design instead of creative solutions to puzzles.

Despite these minor frustrations, “Astro Bot Rescue Mission” is a perfect example of how VR can be used in ways that go outside of the typical trappings of the medium and enhance regular gameplay. With its charming characters, expansive levels, and immersive tricks, it should be viewed as the new standard for platforming games in VR. If you enjoyed games like “Super Lucky’s Tale” in the past, “Astro Bot Rescue Mission” should be required playing.