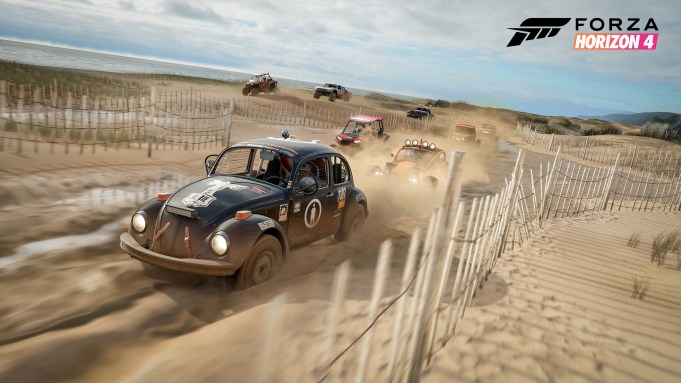 Newton’s First Law of Motion states that “an object in motion stays in motion unless acted upon by an unbalanced force.” To put simply, an object will continue straight endlessly until it’s presumed trajectory is obstructed. In the case of Microsoft Studios’ “Forza Horizon 4,” motion is always fast as you carve and zip down the idyllic European countryside. But just as Newton theorized back in 1687, objects in motion don’t always stay in motion. And when “Forza Horizon 4” is plugged into Newton’s formula, you come to realize that that motion, however temporary it may be, is always obstructed by the game’s unnecessary fluff.

“Forza Horizon 4” is an arrestingly stunning game. Tearing through the pastoral streets of Edinburgh or the open plains of Greendale as an autumn sunset caresses the mountaintops is, quite simply, mesmerizing. Developer Playground Games’ fictitious United Kingdom is the imagery of a Blake poem come to (digital) life. But all that beauty is irrelevant when smashing 180 mph through farmland, and it’s in this excess speed that objects like trees and poles resemble the stiffness of Lincoln Logs. And slowing down to take in the picturesque scenery, observing livestock or coasting by flags, seems to drop the frame counts of these objects. Thankfully, regardless of your graphical setting — you’re given the option between quality mode, higher fidelity targeting 30 FPS, and performance mode, lower fidelity targeting 60 FPS — the game always runs smoothly.

But visuals aren’t as important in a racing game as is the roster of cars. With over 450 licensed cars to choose from, and with each having its own attributes and stats, “Forza Horizon 4” makes selection an exciting albeit daunting task. Unfortunately, once you find one car for each of the race types (and soup it all the way up), the game becomes a breeze as it rarely asks or demands you to change your vehicle. And strangely, the cars feel like they’re composed of aluminum with the weight and, ostensibly, the resilience of a bowling ball. Crashing (whether into nonmoving objects like bridges or cinder blocks, or moving objects like cars) has no satisfying impact, resulting in you whacking against it like throwing a marble at a wall. You come to immediate stops, always, and it doesn’t matter how fast you’re going, your car suffers minor dents and scratches. Though the car models are immaculate and pristine, all of those captivating visuals only mask how stiff the game looks and feels.

While “Forza Horizon 4” is an online game, you can play the entirety of it in offline solo mode. It’s here where you race against the game’s benign AI-controlled Drivatars. Though initially intimidating because of their precision, these Drivatars are exploitable for the exact reason they are intimidating: they are too precise and, as a result, adverse to taking risks. As long as you’re willing to drive a little reckless (even if that means merely drifting more), you can take advantage of these perfectionist AI. “Forza Horizon 4” does adapt to your playstyle and may recommend you raise the difficulty — at the exchange of gaining more credits, the in-game currency — the option adds little tangible difference. If anything, the Drivatars drive faster, which is negligible when the entire point is to drive fast. And the rewind feature (which, with its unlimited uses, allows you to rewind to certain intervals a la Frank Coraci’s “Click”) is convenient at best and confounding at worst as it removes all stakes and consequence from races. Messed up because you drove too fast? At the click of a button, you’re now Adam Sandler.

Aside from driving fast (which is exhilarating thanks to the game’s excellent sense of speed), “Forza Horizon 4” includes a bevy of content to consume. Almost too much. Take a breath. There are dirt races, drag races, cross-country races, road races, seasonal races, and street races you can participate in. There are barn finds (which house a classic car if found), drift zones, playground events, showcase events, and speed traps to engage with. There are influence boards — which, when smashed, generate influence, one of the game’s many leveling systems — fast travel boards — which, when smashed, decrease the cost of fast travel, a puzzling implementation in an open-world racing game — and more. And that’s not even all the game has to offer. In fact, after clearing showcase events (one for each of the four seasons, a welcomed albeit incidental addition), the in-game map becomes so cluttered that it resembles a Ubisoft game. A litany of content is great, but there is such a thing as too much.

And “Forza Horizon 4,” bursting at the seams with its exorbitant and, seemingly, over-reliance on content, becomes unfocused as it progresses. What goes from simply competing for a spot in the Horizon Festival ultimately diverges into chasing influence, not unlike modern social media. The game’s always at its best when you’re putting the pedal to the metal, exceeding 200 mph through the Ashbrooke stretch. And nothing beats listening to Mozart’s Symphony No. 40 in G minor while tearing up the road in a 1992 custom Ferrari Testarossa. It’s a shame, then, that “Forza Horizon 4” seems obsessed with obstructing its own motion.

Windows PC and Xbox One.