While it lacks the reinvention of some of its predecessors, "Black Ops IV" is dutifully crafted, meticulously polished, and the best Call of Duty multiplayer outing in years. 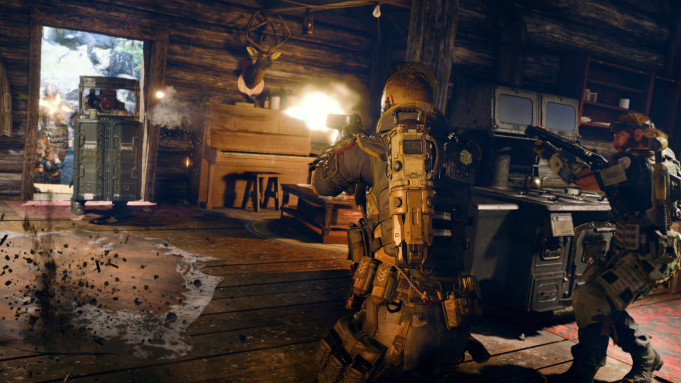 “Call of Duty 4: Modern Warfare” was a defining game. Developer Infinity Ward cut through the veil with a multiplayer mode so dutifully polished and effortlessly confident, you could feel the entire games industry seize with tectonic reordering in the weeks after release. Its ideas might seem quaint or unadorned now; the standard team-deathmatch rigamarole re-casted as a quasi-role-playing game, where you grind through perks and weapon upgrades by scoring kills on the battlefield – but that quaintness is a symptom of how quickly other pretenders mobilized to catch up. The entire games-as-a-service paradigm – the lootboxes, the weapon skins, the dynamic sense of life imbued in everything from “For Honor” to “Counter-Strike: Global Offensive” – can be chalked up to the ingredients first established by developer Infinity Ward, 11 years ago. You can point to “Half-Life,” you can point to “Grand Theft Auto III,” but for my money, there is no game more influential, in such a multitude of ways, than that first “Modern Warfare.”

And so, that makes it kinda weird to watch “Call of Duty” play catch up.

“Black Ops IV,” officially the 16th entry in the main series and the sixth one developed by Treyarch, is a concession. This was clear from the beginning, as the world’s most popular first-person shooter was welcomed back into this world at Activision’s annual “Call of Duty” symposium with the marquee promise of a Battle Royale mode. Battle Royale, of course, is the shorthand used to describe the dystopian, one-versus-all bloodsport in “Fortnite” and “PlayerUnknown’s Battlegrounds,” where players airdrop into a massive, nation-sized map to loot firearms in abandoned houses and systematically exterminate their comrades until a single player reigns supreme. Notably, this is one of the few ideas in competitive multiplayer shooters that did not originate in a “Call of Duty” game, which makes “Black Ops IV” look like a plundering; the same thing hungry studios did to “Modern Warfare” more than a decade ago.

Of course, to the surprise of nobody, Blackout, (the name Treyarch gave to their interpretation of Battle Royale,) is extremely well-polished. Its particulars shade more towards the “PlayerUnknown’s Battlegrounds” tradition, (there is no crafting or building, there are vehicles to commandeer, and much of the loot you’ll be picking up are weapons attachments to augment your armaments,) but mostly, it feels like a uniquely “Call of Duty” epitomization of the genre. Blackout packs the same snappy, twitchy gunplay you remember from earlier titles, but the pace of that action has slowed down considerably. Like other Battle Royale modes, you can go substantial periods of time without seeing another soul, and that builds an uncanny, almost unbearable dread. I’ve never feared for my life in any other “Call of Duty” game, because a respawn was only a square button away. But in Blackout, players often find themselves inching through underbrush and raising my crosshairs at conspicuous shadows on the horizon. Mortality, as it turns out, is a hell of a drug.

Again, Treyarch has clearly studied the intangibles of other successful Battle Royale modes, but the company has added a number of small, sharp flourishes that give Blackout its own identity. For instance, alongside the weapons and attachments in the field, you’ll also find these green boxes during your looting runs that offer you specialized short-term buffs. (One increases the sound of other players’ footsteps, another one makes you less susceptible to fall damage, etc.) The map itself is very reminiscent of the Eastern Bloc island chain from “Battlegrounds,” and it features architecture adopted from other famous warfronts in the “Black Ops” franchise, (including a dilapidated mansion that spits out zombies.) There’s a persistent health gauge now; a departure from the take-a-breather regeneration system present in other “Call of Duty” games, as well as smartly implemented inventory system mapped to the controller’s direction pad which lets you cycle through your utility items with ease. Most importantly, the mode simply feels seaworthy; no glitches, or slowdowns, or round-ending bugs. That’s a big deal, when you consider how “Fortnite” is technically still in beta, and “Battlegrounds” has been dogged by enough technical issues for developer Bluehole to launch an ad campaign literally called “Fix PUBG.”

You might be aware that “Black Ops IV” is the first “Call of Duty” game to ship without a single-player campaign, (with Blackout being positioned as its nominal replacement.) Treyarch made some noise about imbuing “elements” of worldbuilding throughout its different multiplayer modules, but the storytelling is limited at best and completely invisible at worst. That’s not a huge issue. Single-player content in “Call of Duty” has been treated like window dressing in recent years. And multiplayer-only retail games have come back in style thanks to titles like “Overwatch” and “Rainbow Six: Siege,” so it’s not problematic that Treyarch doubled down on the things that make “Black Ops” successful. But if you’re looking for the traditional high-stakes five-hour strike mission, (and its corresponding Ludlum-esque conspiracies,) you’d best look elsewhere.

Instead, “Black Ops IV” packs a standard multiplayer experience alongside Blackout, which takes direct cues from the work Treyarch has done in previous “Call of Duty” outings. Gameplay-wise, you’re looking at something similar to “Black Ops II” – no jetpacks, no wallruns, boots on the ground – while also retaining some of the cyberpunk weirdness of “Black Ops III.” For instance, when you jump into Team Deathmatch, or Kill Confirmed, or Control, you’ll be asked to take the guise of a specific character – each of whom is outfitted with the requisite face tattoos and angular haircuts that give this universe its dirtbag color. That character will pack a deployable trait and “League of Legends”-like ultimate ability that charges over the course of a match. For instance, there’s Ruin – he of the massive greased mohawk and Kratos-aping grimace. When you activate his ultimate, he jumps into the air and unleashes a ridiculous, completely unnecessary ground pound thing that’s capable of clearing an entire room of bad guys. It’s heartening to note that even as “Call of Duty” moves away from the cyborgs and futuretech, it will still find ways to be total bananas in short bursts.

The other tenets of that multiplayer mode are more in line with the established traditions. You can still create a class and alter your loadout, and you will still slowly unlock new guns and new accessories to finetune your playstyle as you level up. (There are also still plenty of garish weapon skins, further solidifying “Call of Duty’s” awful sense of style.) It’s honestly fascinating to consider just how different deathmatch plays in comparison to Blackout, and switching between the two can give you whiplash if you’re not careful.

That leaves Zombies, the final piece of the “Black Ops IV” puzzle. The lineage here is one of the funniest, and most miraculous things in “Call of Duty’s” long, strange trip. Treyarch initially included a tossed-off “Zombie Nazis” mode in 2008’s extremely tertiary “Call of Duty: World at War.” It was thoroughly, intentionally barebones – likely the result of a dev team nursing a heavy “Left 4 Dead” habit – and somehow, it caught fire. Since then Zombies has been a lynchpin for every Treyarch “Call of Duty” game, and naturally it returns in “Black Ops IV” in its most fleshed-out capacity yet. The fundamentals are the same – you’re stuck in a hellscape and a steadily rising tide of zombies are on your tail – but now you can augment your character classes with perks and elixirs to a near “Dungeons and Dragons”–level of modular specificity. That makes sense – Zombies has always appealed to an uber-hardcore subsect of players, some of whom are still modding that original “World at War” framework – but casuals are more likely to appreciate the mode for going full gonzo in a way that “Call of Duty” rarely does otherwise. Do you want to wield the Hammer of Valhalla on the sinking Titanic? “Black Ops IV” has your back.

It’s not entirely clear where “Call of Duty” goes from here. Though one could have asked that same question during last year’s retread into World War II, and “Black Ops IV” seems content to keep kicking that can down the road. Blackout is awesome, but it also comes tethered to an annualized franchise in a way that “Fortnite” and “Battlegrounds” are not. What happens next year, when Infinity Ward unveils the much-rumored “Modern Warfare 4?” A second Battle Royale mode? A wider latitude on a slightly bigger map? Those anxieties obviously shouldn’t matter much to players, who will be happy to know that the product they’re taking home is carefully crafted and generously presented, but “Black Ops IV” doesn’t reinvent the wheel. That might sound like a ridiculous demand – most games don’t reinvent the wheel – but Activision knows better than anyone that you can only stay on top if you’re changing the world. After all, if they don’t, someone else will.

While it lacks the reinvention of some of its predecessors, “Call of Duty: Black Ops IV” is dutifully crafted, meticulously polished, and the best Call of Duty multiplayer outing in years.
Comments