'Assassin’s Creed Odyssey:' The Choice is Yours, But Sometimes It Is a Distasteful One 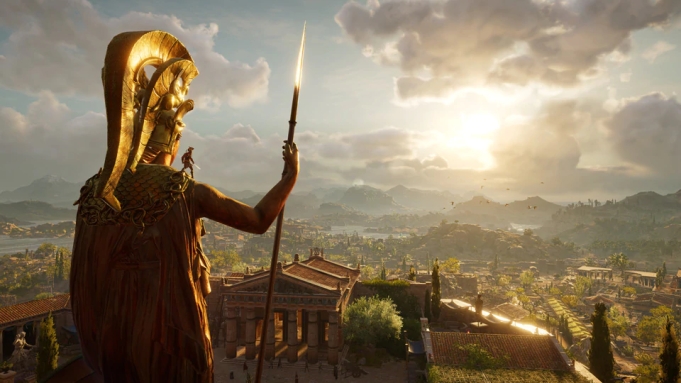 Among all the gorgeous visuals, the dramatic music, and the frenzied action featured in the promotional materials for “Assassin’s Creed Odyssey” there is one theme that is always strongly emphasized: the focus on choice as the game’s central mechanic.  This is somewhat unusual considering that previous games in the series have always insisted that the stories we saw unfolding in the Animus (an advanced piece of technology that would let an individual virtually inhabit a simulation of the memories encoded into the DNA of their ancestors) were set in stone, that the past unfolded the way it did and that there was no way to alter it within the simulation.  In the previous game, a new model of the Animus was developed that would allow anyone to access another person’s memories, no matter their lineage, so long as they had a sample of the individual’s DNA. And in “Odyssey,” developers announced the ancient Greek DNA players explored was “old and imprecise,” meaning that the Animus simulation would sometimes be unsure about how to proceed with regards to small details. The implication is that Layla, the pilot of the Animus, and therefore the player, would have to prompt the machine in these moments, filling in the small gaps in the simulation within the constraints provided by the actual history.

Of course, the most obvious choice (and the one touted most during the game’s marketing campaign) comes at the outset of the game: will you play as the male or female version of the mercenary hero?  Soon after, you are asked to make another important decision about how you will interact with the Animus simulation. Will you choose the more traditional Guided Mode, in which the Animus provides you with a Zeus’s eye view of your current objective via markers telling you exactly where you need to go?  Or will you attempt to immerse yourself in the mercenary’s story in Exploration Mode, collecting clues from other characters to guide your travels along the dauntingly large world map?

Once the simulation begins in earnest, the number of choices you must make grows exponentially. When it comes to combat, “Odyssey” picks up where “Origins” left off, giving players a branching skill tree that will let them stitch together classic “Assassin’s Creed-”style stealth kills with bowmanship and blade work. Players must also choose their equipment from a potentially overwhelming number of options, customizing and upgrading their favorite pieces along the way to maximize combat effectiveness, though this freedom might feel more like a burden than a boon to some. Then there are the dizzying array of side quests and optional narratives you can choose to engage in or not as the mood strikes; in addition to experiencing your mercenary’s main storyline, you might also decide to lend your spear to either the Spartans or the Athenians during the Peloponnesian War, sneaking behind enemy lines to destroy supplies, harming morale by targeting key civilian leaders, and taking part in chaotic battlefield melees that feel like they were pulled right out of “300.” You can also choose to turn detective and track down members of the Cult of Kosmos, a secretive order that is manipulating both sides of the aforementioned conflict. You can even, for the first time in the series, choose to engage in a little extra-curricular nookie in between missions if you are into that thing.

And yet, all of these choices introduce a fundamental question about how the game will ultimately fit into the rest of the series. “Odyssey’s” Animus might have the extra computational power to fill in unknown bits of history, but the larger forces that surrounded the mercenary protagonist in the past and that continue to direct the fate of the world in the present of the franchise’s storyline remain in place no matter whether you fight on behalf of Sparta or Athens, no matter who you choose to romance, and no matter how many conspiratorial cultists you kill. If this is the case, then do any of the choices the game has on offer really matter? Or are they mere window dressing providing an illusion of control to the player as they march through a scripted story taking place in a deterministic universe?

Compounding these frustrations are the final set of choices that developer Ubisoft offers players of “Assasssin’s Creed Odyssey:” the option to purchase souped-up weapons, experience boosts, and in-game maps revealing the location of valuable treasures in their online store.  Ubisoft representatives have reportedly denied manipulating the game’s difficulty curve to steer players towards making these additional expenditures, calling them “100 % optional for players who want to supercharge their progression” and declaring that they “were not considered in any of the economy or difficulty balancing of the game.” However, there are stretches when it feels as though the player is being corralled within an area and forced to complete repetitive side quests to level up before moving on to the next area, and thus the prospect of making these periods of enforced downtime shorter feels extremely tempting, if a bit slimy.

Maybe the decision to partake in these microtransactions is itself a brilliant bit of meta-storytelling on the part of Ubisoft. After all, in a way, the moral dilemma they present reflects the ideological divide  separating the two great city-states of Ancient Greece; just like the Spartans, players can decide to engage in a masochistic, dutiful grind towards perfect mechanical execution. Or, like the Athenians, they can reject hierarchical regimentation in favor of greater freedom, so long as they don’t mind paying extra for the privilege. Or maybe all these additional monetization schemes represent Ubisoft’s attempt to role play as their own series villains, the Abstergo Corporation, who themselves recently began to dabble in video game production in previous titles. Either way, it must be said that purchasing the experience booster does make the game flow much more smoothly. Whether players are willing to stomach the assassination of their wallets, however, is itself a matter of choice.

Megan Condis is an Assistant Professor of Game Studies at Texas Tech University.  Her book, “Gaming Masculinity: Trolls, Fake Geeks, and the Gendered Battle for Online Culture” was published in 2018 by the University of Iowa Press.  She blogs at https://megancondis.wordpress.com/ and you can find her on Twitter @MeganCondis.