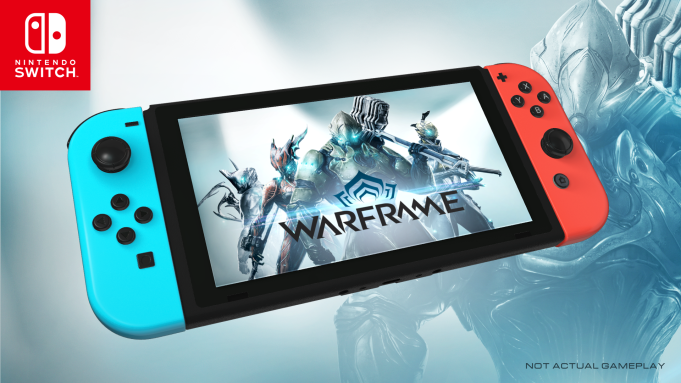 “Warframe” is in development for the Nintendo Switch by the studio behind the Switch ports of “Doom,” “Wolfenstein: The New Colossus,” and “Rocket League.”

The development by studio Panic Button was announced at TennoCon, the annual “Warframe” convention held by Canadian developer and publisher Digital Extremes, today.

The cooperative free-to-play “Warframe” has more than 38 million registered players worldwide. The third-person online action game has players using the Warframe armor as the enigmatic Tenno, a race of ancient warriors wielding blade and gun, who are awakened from centuries of cryo-sleep by the Lotus to restore order throughout the Solar System. Warframe, which is already available on PS4, Windows PC, and Xbox One, features more than 35 Warframes, hundreds of weapons and thousands of customization options, the ability to upgrade weapons armor and items using a flexible mod system, and the ability to join clans, nurture pets, and explore massive new open worlds. It’s unclear how much of the game will be coming to the Nintendo Switch as a port or when that version will arrive.

In an interview with Variety at E3 last month, Adam Creighton, director of development and co-owner of the Panic Button, said the company was working on another major port expected to be announced this month.

He also noted that Panic Button has spent more time working on bringing big AAA titles from other platforms to the Switch than most. Adding that his studio has spent nearly six years working with Nintendo’s Switch hardware, including early development tech.