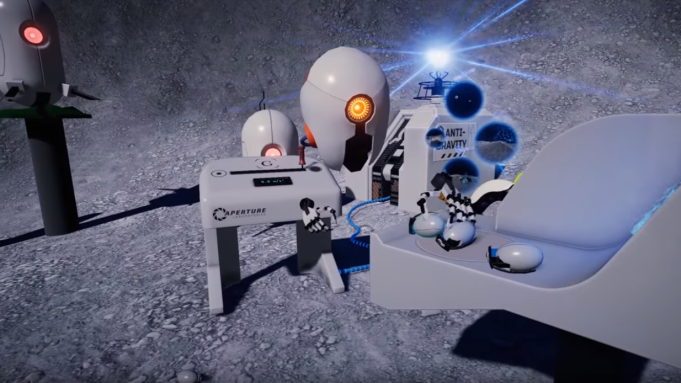 Valve released a new demo on Thursday for its Knuckles EV2 virtual reality controller. Called Moondust, the demo is a sandbox designed to test potential game mechanics with the new inputs.

Moondust takes place in the “Portal” universe. The player is a giant robot assisting Aperture Science in the search for the moon-based conversion gel used in its portal technology. The demo uses all of Knuckles EV2’s new inputs, Valve said, and showcases a few new game mechanics.

“‘Moondust’ was created on a limited schedule, and is not perfect. It is, however, the best current demonstration of all the features of Knuckles EV2,” Valve said.

The player can take advantage of the high-fidelity force sensors on Knuckles EV2 to crush moon rocks in their giant robot hands. “One of the first things I wanted to make when I heard Knuckles would have force sensors was a rock crushing scene. Ideally as a gigantic robot,” Valve said.

The player can also use the joystick and other inputs to practice driving a moon buggy. But, that buggy scene was apparently a “nightmare” to create. We went through at least 20 control schemes, mapping and remapping the buttons,” Valve said. “Every playtester liked something different.”

Full 10-finger tracking lets the player build a space station in orbit, or they can enjoy some target practice with what Valve claims is “the most natural throwing VR can offer.”

“Throwing is an eternal problem in VR. Everything’s moving fast, there are tons of variables, and tiny differences in release times can result in wild inaccuracies. Now, with Knuckles EV2, we introduce even more variables! The capsense for finger poses and force sense for grip strength can be utilized to make throwing more accurate than ever, but they also increase the complexity of the release calculations. Fortunately, we did all the work for you.”

Hundreds of Knuckles EV2 developer kits are going out to game developers soon, Valve said. In the meantime, they can add the Moondust demo to their libraries and try it out.