Continue to Variety SKIP AD
You will be redirected back to your article in seconds
Jul 12, 2018 5:57am PT 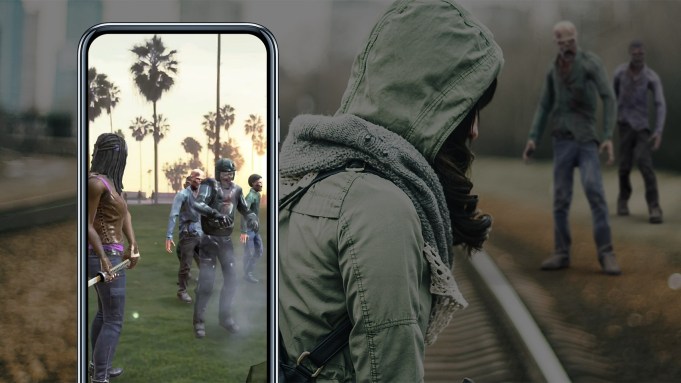 The location-based, augmented-reality game is a free-to-play iOS and Android title that drops a layer of walkers and well known character’s from AMC’s adaptation of Robert Kirkman’s zombie comics onto your surroundings. The game uses Google Maps and augmented reality to give players a map of their real world populated with the enemies. The goal of the game, unlike popular AR title “Pokemon Go,” is essentially to survive.

The game launches with a real world map of gamers surroundings and icons showing off nearby zombies, infestations and caches. If they’re close enough, a player can just tap on them to either grab and unlock the cache or to take on the zombies. In battle, the zombies show up in front of the player, who then taps on them to shoot the shambling dead. Dexterity does play a role in this fights, for instance head shots do more damage, but it’s still a very simplistic approach to a shooter. A player can also tap a button to turn the drawn background into a real world view of your surroundings, which it then populates with the enemies. As you play through the game, you unlock weapons and friendlies — including fan-favorites like Rick, Daryl and Michonne. The sidekicks can join you in battles and as you level them up, they bring along special abilities. Weapons can also be traded and leveled up.

The game also supports cooperative horde battles and the ability to build out a base of sorts which rewards you with in-world goodies.

While the game may sound a lot like developer Niantic’s massively popular “Pokemon Go,” AMC’s Clayton Neuman tells Variety that isn’t the goal.

“‘Pokemon’ is a great game, and it did a lot to innovate in this space,” he said. “But our goal wasn’t to make ‘Pokemon Go’ with zombies. Augmented reality and location gaming is a great way to bring “The Walking Dead” into our world. It gives you a chance to experience the apocalypse and live out hypothetically what you would do.”

The game does seem to take away some lessons from “Pokemon Go’s” early days. For instance, Neuman said that the team made sure that no matter where you live, no matter how rural it is, you’ll always have something to do.

“That was a concern we had,” he said. “The fan base is huge and diverse and they aren’t just in urban areas. So no matter where you hare you should have plenty to do, plenty of missions that spawn around you.”

While the game does push you to get out and find things to do in your area, it does also have the ability to attract zombies to you by using bait or calling in help from friends, no matter where the live in the world, by creating a sort of local mission with a flare.

“Certainly going out and getting things is something we want people to do,” he said. “That’s what the show is about. You’re in a community and you need something, so you go on a run. Going out and encountering things in the world and then bringing what you collected back. I don’t think it would have been authentic without doing that. But we didn’t want to leave people who don’t want to, or can’t get out, out in the cold.”

AMC and the developers also have a long roadmap for the game’s ever-expanding future, Neuman said.

“We see ‘The Walking Dead’ universe as something that lives 365 days of the year,” he said.

The includes things like loose tie-ins to the shows (though characters, living and dead, can and will be in the game).  The plan is to also roll out different mission types, new zombies beyond the five available at launch and perhaps even live multiplayer modes. The game will also get updates to its use of AR, which currently looks a bit sloppy at times.

“ARKit 2 promises vertical plane detection which will allow us to do things like if there is a table or wall there the camera will know not to place a zombie there,” Neuman said.