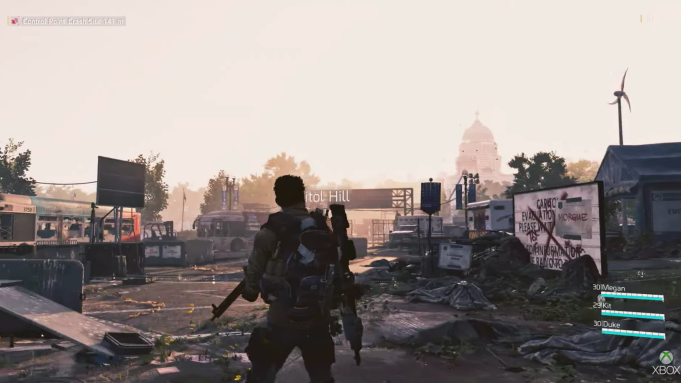 “The Division 2” takes place in a fallen Washington, D.C. seven months after the outbreak began, and the setting of the original “Division.”

Agents are the only ones standing against a new civil war in the united states, according to the trailer released Sunday during Microsoft’s E3 press conference.

After showing off the opening trailer for the upcoming game, Ubisoft showed off some gameplay from the title.

The demo walkthrough showed soldiers in a heavily vegetated areas in Washington, D.C. so overgrown it’s hard to tell it was once part of a city. At one point the team makes its way into a museum and find a Christmas tree, which they turn on. Then they stumble upon a small group of survivors who are holed up inside in tents. They’re asked to find medicine for a sick child.

A new side mission opens up later, sending the four toward a crash site near the center of D.C. Soon, the team realizes that the control point they are after centers around the crash site for Air Force One. The ensuing engagement shows off new weapons, tactics, specialization. Some of those include a crossbow, a soldier who uses a foam that hardens into a concrete like substance that locks a player in place, and chemical bombs that can be ignited.

After taking out the enemies, the team goes into the plane to analyze what happened, while inside they’re attacked once more.

“Game plan,” one soldier asks. “Take back the capital another says.” “I think we’re ready.”