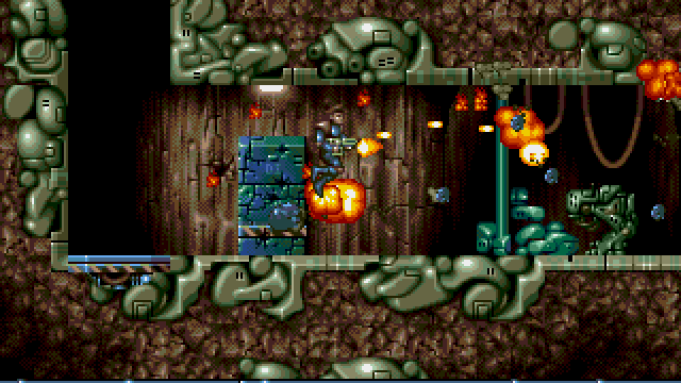 DICE created the game in 1994. Psygnosis was supposed to publish it on the Amiga, Sega Mega Drive Genesis, and Sega Mega-CD consoles, but it was suddenly put on hold. The publisher apparently wanted to shift focus to the next generation of consoles, specifically the PlayStation. “This was a shock for everyone involved, especially for the developers who were committed to their project and working very hard,” Strictly Limited wrote on the game’s official website.

DICE moved on to do other stuff and the game was long considered a lost treasure… until now. We’re all very stoked to see the enthusiasts behind @RealStrictlyLTD having resurrected the game. Check out their trailer here! 3/3 https://t.co/7xhgWs34Bv

DICE moved on to other projects and the game was largely forgotten — until now. “Hardcore” is reportedly being developed with original Sega Mega Drive hardware. It will then be ported to modern platforms, Strictly Limited said.

“We intend to finish the game the way it was meant to be played! With input from the original developers, we will try to add the missing tank levels back into the game,” it said. “Everything is being handled with care, to guarantee gamers get the best possible version of this masterpiece.”

“Hardcore” will be released sometime in 2019 on PlayStation 4 and PlayStation Vita. Strictly Limited will have more information on it at a later date.

“I know the care, love, sweat and hard work that went into creating ‘Hardcore’ in the first place by all involved parties,” said DICE founder Fredrik Liljegren. “Thus, I think it is fantastic that this product finally gets to see the light of day and for people to be able to play it finally.”