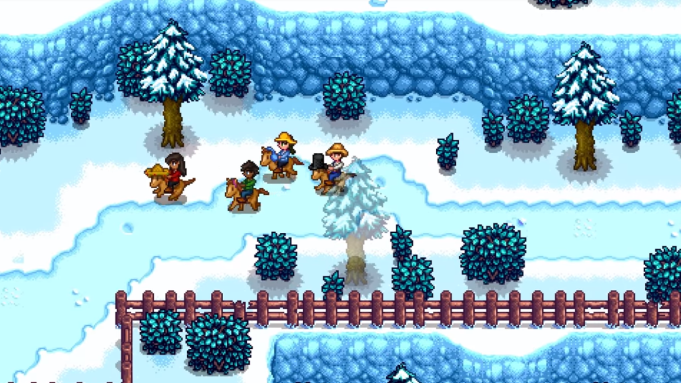 The new co-operative mode lets players recruit up to three other people as farmhands. Together, they can gather resources, plant crops, battle monsters in the cave outside town, and more. The farmhands can build their own cabin on the host’s land. They can even marry each other and/or get divorced. All players share the farm, money, and world updates (completing Community Center bundles, for example), but inventory, skills, and NPC relationships are all separate.

“In deciding what to share vs keep separate, our main goal was to encourage cooperation and teamwork,” Chucklefish developer Tom Coxon said in a blog post. “Since the farm and your money pot are your main way of progressing through the game, they have to be shared in order to facilitate cooperation. Without this, there would be no need for players to even interact!”

“Stardew Valley” launched on PC in February 2016 and has sold over 3.5 million copies across multiple platforms, according to industry analyst SuperData. Barone first showed off an early co-op demonstration over five years ago, but publisher Chucklefish didn’t announce it as a feature until August 2017. Obviously, it’s been a long wait for fans eager to experience “Stardew Valley’s” extremely chill gameplay together.

The multiplayer update will be available on Steam, GOG.com, and WeGame on Aug. 1. There’s no firm release date yet for Nintendo Switch, PlayStation 4, and Xbox One.