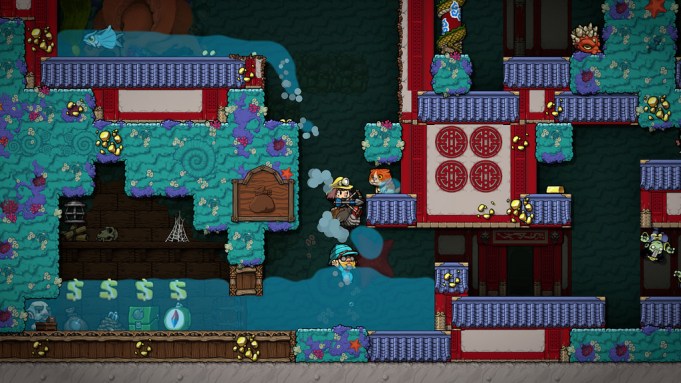 Publisher BlitWorks and developer Mossmouth gave fans their first peek at “Spelunky 2” in a new gameplay trailer on Wednesday, which can be seen above.

“Spelunky 2” is a sequel to Derek Yu’s critically acclaimed 2008 rogue-like platformer and it looks just as soul-crushingly challenging as its predecessor. It has all-new locales, monsters, traps, and items, but it also adds a number of new features like rideable mounts, liquid physics, and online multiplayer. It’s getting a visual overhaul as well, and areas now have a second layer, which adds a third dimension to the player’s exploration.

But, at its core, “Spelunky 2” is not too different from “Spelunky,” Yu said in a recent interview on the PlayStation Blog. He sees sequels as extensions of the previous games and said he wants fans to jump in and feel like they’re playing a continuation, from both a story and mechanics perspective.

That doesn’t mean he’s not thinking of new players, though.

“My philosophy has always been to attract new players by making the world more interesting and inviting instead of focusing on tutorials and things like that,” he said. “‘Spelunky’ is still ‘Spelunky’ and it will be very challenging — my hope is that new players will want to persevere because we made the effort worth it. ‘Spelunky 2’ will have very strong themes of family and friendship and I want new players to feel cared for even as we put tough obstacles in their way.”

“Spelunky 2” is coming to PlayStation 4 and Steam sometime next year. Fans can check out a demo at the Sony booth during PAX West 2018 this weekend.