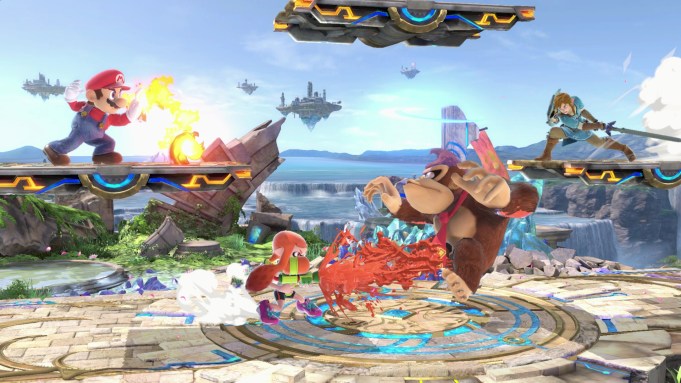 The new “Smash Bros.” game will include every single character to ever appear in the fighting series during its nearly two-decade run, Nintendo announced Tuesday during its E3 Direct. Dubbed “Smash Bros. Ultimate,” it comes to Nintendo Switch December 7.

In addition to old favorites, Nintendo is adding some new fighters to the roster, including Ridley from the “Metroid” franchise and “Splatoon’s” Inkling. The game will support a variety of controller options, Nintendo said, including Gamecube controllers (original or newly designed), Joy-Cons, or the Switch Pro controller. All current “Smash Bros.” amiibo figures are compatible with “Ultimate,” and fighter amiibos from other series will also be supported.

“At E3, we’re showing how Nintendo Switch continues to redefine play, with the broadest range of games people can enjoy together anytime, anywhere,” said Reggie Fils-Aime, Nintendo of America’s President and COO, in a press release. “Fans who’ve debated which ‘Super Smash Bros.’ fighter is the best now have the chance to settle their differences once and for all, pitting familiar faces against fresh challengers on stages both new and old. ‘Super Smash Bros. Ultimate,’ ‘Pokémon: Let’s Go, Pikachu!’ and ‘Pokémon: Let’s Go, Eevee!,’ and the arrival of Epic’s ‘Fortnite’ on Nintendo Switch demonstrate the strong momentum Nintendo Switch continues to have through 2018 and beyond.”

Here’s the full roster of characters revealed during Nintendo’s E3 Direct presentation. The number next to their names signifies the order they first joined the “Smash” series: