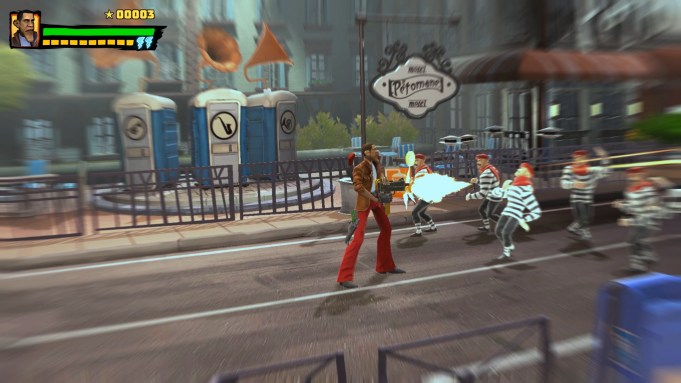 Barack Obama is joining the cast of the irreverent “Shaq Fu: A Legend Reborn,” the sequel to 1994’s arcade adventure starring Shaquille O’Neal. He’s starring in his own special bonus companion game that was included with all physical copies “A Legend Reborn,” which will be available starting tomorrow.

“Barack Fu: The Adventures of Dirty Barry” features a parodic version of the 44th President of the United States as he sets off on his own mission to flatten all of his foes. The bizarre adventure finds the former president on the trail of a serial celebrity murderer that the police can’t seem to catch. They call in “Dirty Barry” to take over, and players will jet from Paris to outer space and back again battling through wild bosses to save the celebs from their impending, grisly ends.

Enemies range from politicians to clones, and even flying rear ends, and you can use Barry’s “Peace Prize” drone strike for some instantaneous crowd control. “Dirty Barry” mode helps rack up kills with an assault rifle and plenty of grenades to help thin out herds of enemies. He also has the “Barack ‘n Rolla” and “South Side Smash” moves up his sleeve for some devastating melee attacks. No, we’re not making this up.

If this sounds like a spectacle you need to witness, you’ll need to pick up a physical version of “Shaq Fu: A Legend Reborn” on Xbox One, PlayStation 4, and Nintendo Switch. The “Barack Fu” game is a timed exclusive that is only available to those who purchased physical editions already.

“Shaq Fu: A Legend Reborn” is a crass beat-’em-up from Big Deez Productions. Created in an attempt to lend more legitimacy to the series and “avenge” the original Super Nintendo and Genesis title, it’s safe to say that it didn’t really accomplish that goal, as the game debuted to lukewarm critical reception.