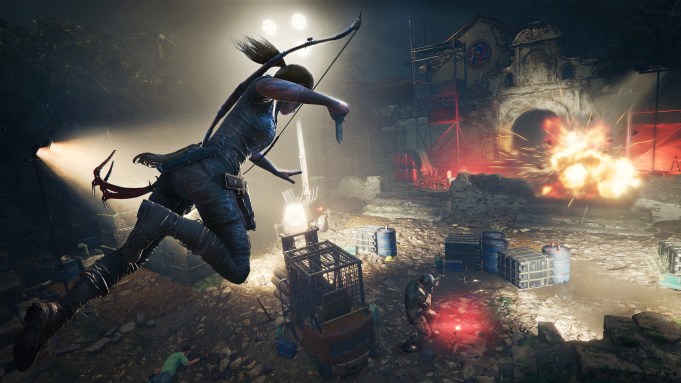 Square Enix showed off a very stealthy Lara Croft during its E3 2018 presentation on Monday.

In the upcoming “Shadow of the Tomb Raider,” Lara will “become one with the jungle,” according to Eidos Montreal senior game director Daniel Chayer-Bisson. During the brief gameplay video, she takes down enemies in a variety of sneaky ways, including swooping down on a rope. So, she’s basically morphing into Batman. Chayer-Bisson said Lara will have a variety of new moves, including grappling, wall running, and 360 degree swimming, which means there will be underwater areas to explore and plunder.

The hub world is the biggest Eidos Montreal has created for any “Tomb Raider” game, and it includes a large hidden city, Chayer-Bisson said. Of course, there will also be plenty of tombs and they’ll be deadlier than ever.

“Tomb Raider” is an important IP for Square Enix. The 2013 and 2015 reboots have sold over 18 million copies combined, Square Enix CEO Yosuke Matsuda told GamesIndustry.biz in 2017.

“Shadow of the Tomb Raider” is expected to launch on September 14 on PC, PlayStation 4, and Xbox One. E3 attendees can try a playable demo at the Square Enix booth and the Xbox Experience at the Microsoft Theater. Meanwhile, the NVIDIA booth will host a playable demo of the PC version behind closed doors during the expo.