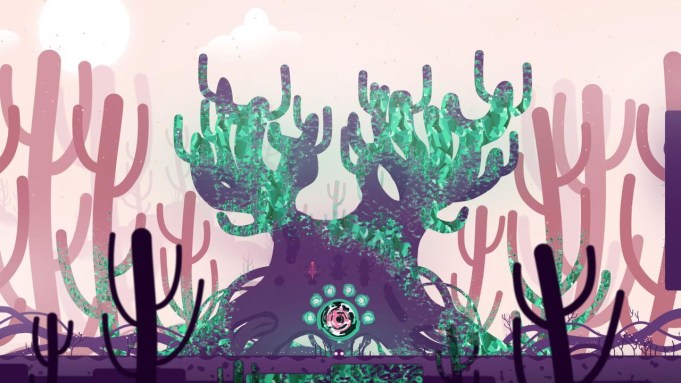 Puzzle platformer “Semblance” is coming to Nintendo Switch, PC, and Mac on July 24, 2018. Its release marks the first time a South African-developed game has ever arrived on a Nintendo system, which is big news for independent developer Nyamakop.

The game’s unique and colorful aesthetic, as well as its story that “unravels organically” as you make your way through the world make it an intriguing release, even aside from its groundbreaking status as South Africa’s first game on the Switch.

Designer Ben Myres and programmer Cukia “Sugar” Kimani teamed up to bring the bubbly “Semblance” to life, which introduces us to a jelly-like world rife with many different obstacles. Players take on the role of a small, purple blob named Squish as they navigate a series of purple, teal, and pink-hued side-scrolling levels.

Squish is a malleable protagonist who can be reshaped and formed into various incarnations to assist players when it comes to navigating “Semblance’s” terrain. Players can actually “shape” the world as they bounce along, solving a variety of different spatial puzzles. By jumping up and into pieces of the landscape, Squish can reform parts of each level to open up new solutions to environmental quandaries.

The game has been in development for three years, and it’s been shown off at a number of consumer shows around the world, including E3, PAX East, Gamescom, and EGX. It’s being published by Good Shepherd Entertainment, who you may remember from titles like “MachiaVillain,” “Oh…Sir!! The Insult Simulator,” and “Hard Reset Redux.” The company began life as Gambitious, a crowdfunding platform meant for indie games, before a rebrand shifted its focus to publishing.

There’s currently no word on whether “Semblance” will eventually make it to other consoles, either PlayStation 4 or Xbox One, at this time.