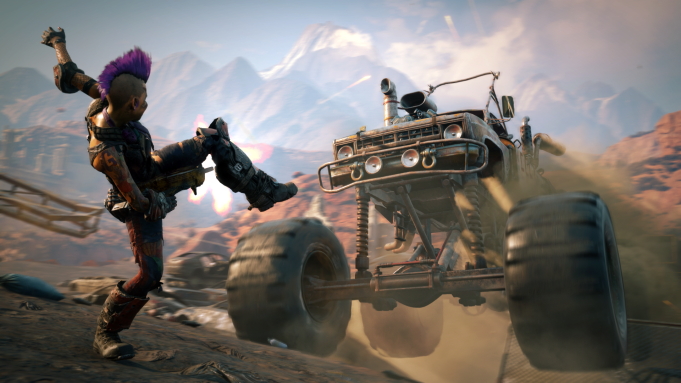 Publisher Bethesda released the first official gameplay trailer for “Rage 2” on Tuesday and it’s like “Mad Max” had a baby with “Borderlands.” It’s full of over-the-top action, punk rock, and big guns.

“Rage 2” is a post-apocalyptic first-person shooter from Id Software and Avalanche Studios. After an asteroid takes out 80% of the earth’s population, bloodthirsty gangs prowl the open roads and a tyrannical organization called the Authority rules. As a ranger named Walker, the player seeks payback after their home is taken and they’re left for dead.

Bethesda is promising a “carnival of carnage where you can go anywhere, shoot anything, and explode everything.” The game features an open world that players can seamlessly traverse, a variety of vehicles, and a faction system full of madmen, mutants, and monsters.

The world first learned of “Rage 2’s” existence last week when pre-order info supposedly appeared on the Walmart Canada website for it and various other unannounced titles like “Gears of War 5,” “Borderlands 3,” and “Lego DC Villains.” They’ve since been removed from the site. Bethesda took the leak in stride and spent the week toying with fans. It released a number of teaser images on Twitter seemingly pointing toward an announcement on May 14. Finally, it confirmed on Monday that a new “Rage” was on the way.

The first “Rage” was released in October of 2011 on PC, PlayStation 3, and Xbox 360. It received generally positive reviews. Many critics praised its combat and graphics, while criticizing the lack of story.

Bethesda hasn’t hinted at a release date yet. Expect to see more of “Rage 2” at next month’s Electronic Entertainment Expo in Los Angeles.