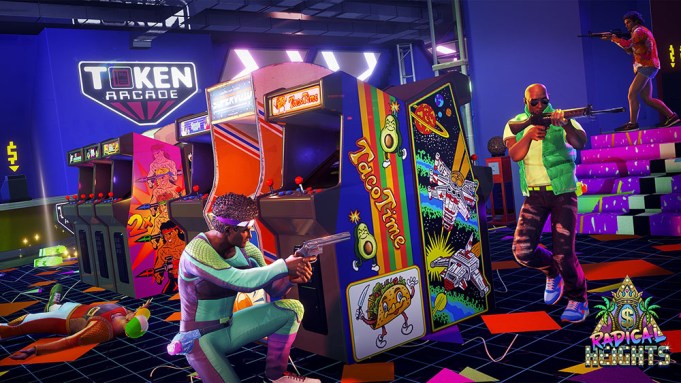 Less than a week after mothballing its premiere game, “Lawbreakers,” studio Boss Key Productions announced Monday that it plans to launch its second title: a free-to-play battle royale game.

“Radical Heights,” which goes live as an early-access title on Steam, is described as a last-person-standing shooter with an ’80s aesthetic and a game-show twist.

“This is a five-month passion project for the studio as we’re creating and publishing the game entirely by ourselves,” Zach Lowery, “Radical Heights” creative director, said in a statement. “We’re huge fans of Battle Royale games along with the bright, inviting irreverence of the ’80s aesthetic. Because of that, we want to put our own spin on the genre and create a futuristic ’80s world that takes place in 2023 during an over-the-top game show where contestants battle it out for fame and prizes.”

The result appears to be a game that leans into the deadly game-show conceit popularized with movies like “Running Man,” in which players fight to the death for fabulous prizes and cash.The in-game cash also carries over between matches, according to the press release. The official trailer for the game shows off the ability to withdraw and deposit in-game cash during the middle of matches, riding around and performing stunts on colorful BMX bikes, shootouts in arcades, and “game show moments.”

“Game Show Moments” take place at random during each match in dynamic fashion, with more to be introduced as the game continues development in Early Access, a spokesperson tells Variety. When the game launches tomorrow, it will have, according to the spokesperson:

The team at Boss Key Productions, lead by former Epic Games design director Cliff Bleszinski, also says they plan to work with players to continue to shape the game with ongoing content updates, patches, and even allowing the community to “guide development decisions.” A large portion of the studio is working on this new game, a spokesperson tells Variety.

While the title is free-to-play, and the team promises there won’t be any gameplay-altering microtransactions, players can purchase a Founder’s Pack for $14.99, which includes exclusive items and bonuses.

Epic Games recently found great success with its own approach to open-development, which launches a game early and then continues to build and change it to meet the tastes of its gamers. “Fortnite’s” Battle Royale mode, which was added as a test by a small team at Epic after the game’s launch, is now the chief focus of the company with a majority of its 700 staff working on the game. “Fortnite” is free-to-play and features cosmetic items for sale in-game as well as a Founder’s Pack. The iPhone version of the game alone brought in an estimated $15 million in revenue in the first month, according to analysts.

Boss Key could likely use a quick hit after its 2017 premiere title, “Lawbreakers,” failed to find a large enough paying audience to support it. Two months after the August 2017 launch of the game, the concurrent player count was near the single digits. Publisher Nexon has indicated it isn’t interested in investing more money in the game. Boss Key says it would like to transition the game to free-to-play, but can’t do so without more time, money, and publisher support.